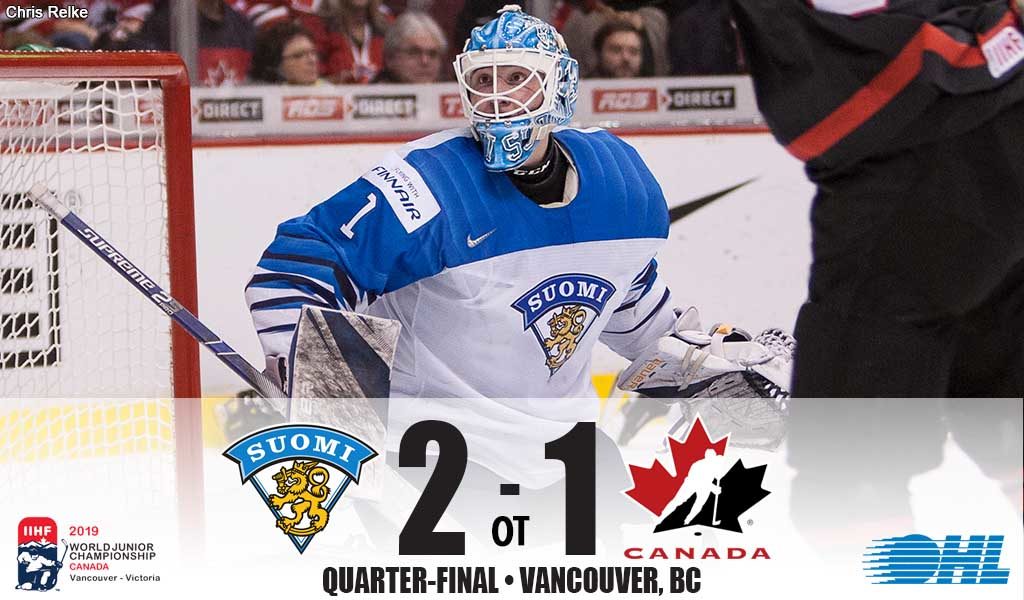 Russia, the United States, Finland and Switzerland are all that remain on the road to gold at the 2019 IIHF World Junior Hockey Championship, scoring victories on an eventful Quarter-Final Wednesday in Vancouver and Victoria, BC.

FINLAND 2, CANADA 1 – OT
Canada’s pursuit of a second straight gold medal at the World Juniors came to a disappointing end on Wednesday as Toni Utunen scored 5:17 into overtime to give Finland a 2-1 victory at Rogers Arena in Vancouver.

Canada led 1-0 until the final minute of regulation when former Swift Current Broncos forward Aleksi Heponiemi found the back of the net, doing so with 46 seconds left on the clock as Finland had six skaters on the ice with their net empty.

Buffalo Sabres prospect Ukko-Pekka Luukkonen (Sudbury Wolves) was the difference, stopping 24 of the 25 shots he faced including an overtime penalty shot attempt off the stick of Canadian captain Maxime Comtois (Drummondville Voltigeurs).

Vancouver Canucks prospect Michael DiPietro (Ottawa 67’s) made 32 saves for Canada as they were outshot 34-25 and will come away empty-handed without a medal on home soil for the first time in Word Junior Championship history.

Finland advances to Friday’s Semi-Final while Canada wraps up the 2019 World Juniors with a 3-2 record, placing sixth.

UNITED STATES 3, CZECH REPUBLIC 1
The United States is Semi-Final bound after Sasha Chmelevski (Ottawa 67’s) contributed a goal in a 3-1 victory over the Czech Republic in Victoria.

Jason Robertson (Niagara IceDogs) picked up an assist while other American goals came from Noah Cates and Josh Norris as the U.S. outshot the Czechs 41-19.

The United States is still in the running for a medal as they look to finish on the podium for a fourth straight year. They’ll take on Russia on Friday at 4:00pm ET/1:00pm PT while the Czech Republic finishes in seventh place.

SWITZERLAND 2, SWEDEN 0
Perhaps the shock of the 2019 World Juniors to this point, Switzerland stunned Sweden as goaltender Luca Hollenstein stopped all 41 shots he faced to propel his country into Friday’s Semi-Finals.

After finishing with silver last year in Buffalo, the Swedes will return home empty-handed for the fourth time in five years. While they place fifth in the tournament, Switzerland advances to face Finland in Semi-Final action on Friday at 8:00pm ET/5:00pm PT.

RUSSIA 8, SLOVAKIA 3
Washington Capitals prospect Alexander Alexeyev (Red Deer Rebels) had a goal and an assist as Russia surged past Slovakia 8-3 in Vancouver, punching its ticket to Friday’s Semi-Finals.

Russia climbed out to a 7-0 lead before Martin Fehervary got Slovakia on the board 3:35 into the third period. Milos Roman (Vancouver Giants) and Michal Ivan (Acadie-Bathurst Titan) would add Slovakian goals before the final buzzer. Ivan finished with a goal and two assists to his credit.

Slovakia outshot Russia 35-30 as Pyotr Kochetkov made 32 saves to record the win.

Russia will face the United States in Semi-Final action on Friday at 4:00pm ET/1:00pm PT. Slovakia wraps up the 2019 World Juniors in eighth place.

KAZAKHSTAN 4, DENMARK 3 (RELEGATION)
Demid Yeremeyev made 38 saves, backstopping Kazakhstan to its first win of the 2019 World Juniors in Game 1 of a best-of-three set against Denmark to avoid relegation.

The Danes, who hadn’t scored a goal in the tournament prior to Wednesday’s game, outshot Kazakhstan 43-19.

Goals from Oleg Boiko, Yernar Musabayev, Sayan Daniyar and Artur Gatiyatov gave Kazakhstan enough to get past Denmark who had an assist from Phillip Schultz (Victoria Royals) in the loss.

The two teams meet again on Friday in Vancouver.