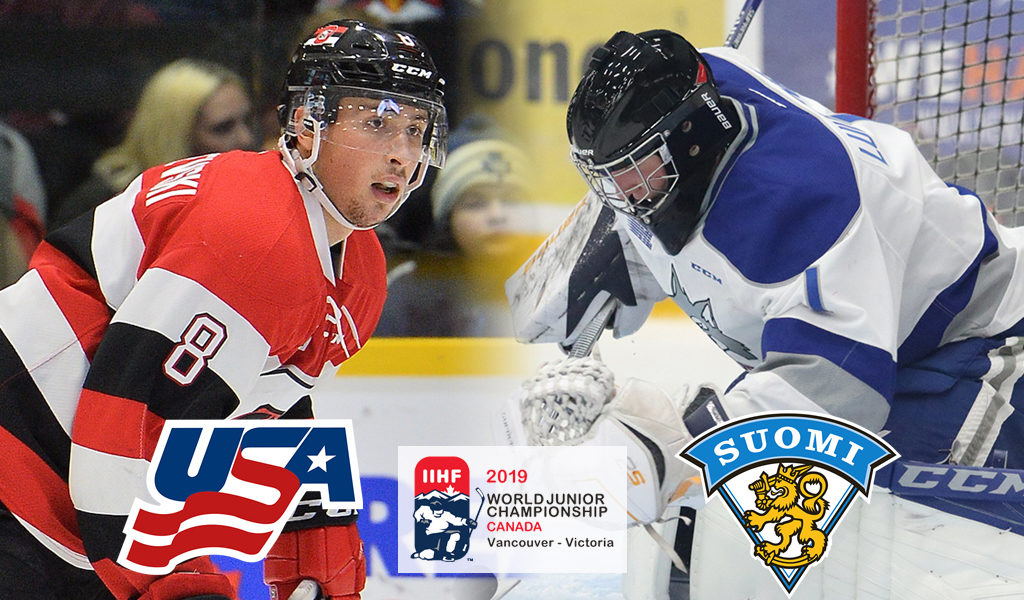 The United States and Finland emerged victorious from Friday’s Semi-Final action at Rogers Arena in Vancouver. The two nations will meet for gold on Saturday while Russia squares off against Switzerland for bronze. Here’s a closer look at Friday’s action.

UNITED STATES 2, RUSSIA 1
San Jose Sharks prospect Sasha Chmelevski (Ottawa 67’s) scored what would stand as the game winner as the United States punched its ticket to Saturday’s Gold Medal Game with a 2-1 win over Russia in Vancouver.

Oliver Wahlstrom opened the scoring with 5:31 left in the opening frame before Chmelevski put the U.S. up by two 4:20 into the second. Russia’s Grigori Denisenko would cut the American lead in half with 6:24 to spare in the second, but that’s all the offence the Russians could muster as Cayden Primeau turned aside 34 shots for the win.

Russia outshot the United States 35-27 but will look to return to the podium on Saturday when they face Switzerland for bronze at 4:00pm ET/1:00pm PT.

The United States will meet Finland for gold on Saturday at 8:00pm ET/5:00pm PT.

FINLAND 6, SWITZERLAND 1
Finland stormed out to a 4-0 first period lead and never looked back, defeating Switzerland 6-1 to advance to Saturday’s Gold Medal Game.

Switzerland looks to seize a historic opportunity on Saturday, looking to secure their first bronze medal at the World Juniors since 1998. They’ll have to get through a high-powered Russian team to achieve that goal when the puck drops at 4:00pm ET/1:00pm PT.

Finland and the United States will both be playing for their fifth-ever gold medal at the World Juniors when the puck drops on the big dance at Rogers Arena on Saturday at 8:00pm ET/5:00pm PT.

KAZAKHSTAN 4, DENMARK 0 (RELEGATION)
Kazakhstan will return to the World Junior Hockey Championship in 2020 while Denmark will be relegated following a 4-0 Kazakh victory in Vancouver.

Demid Yeremeyev stopped all 25 shots he faced while Kazakhstan scored four times on 17 shots to defeat Denmark for a second-straight game and secure their place in next year’s World Juniors.

Sayan Daniyar and Davyd Makutskiscored first period markers before Artur Gatiyatov tacked on a pair in the third to seal the deal.