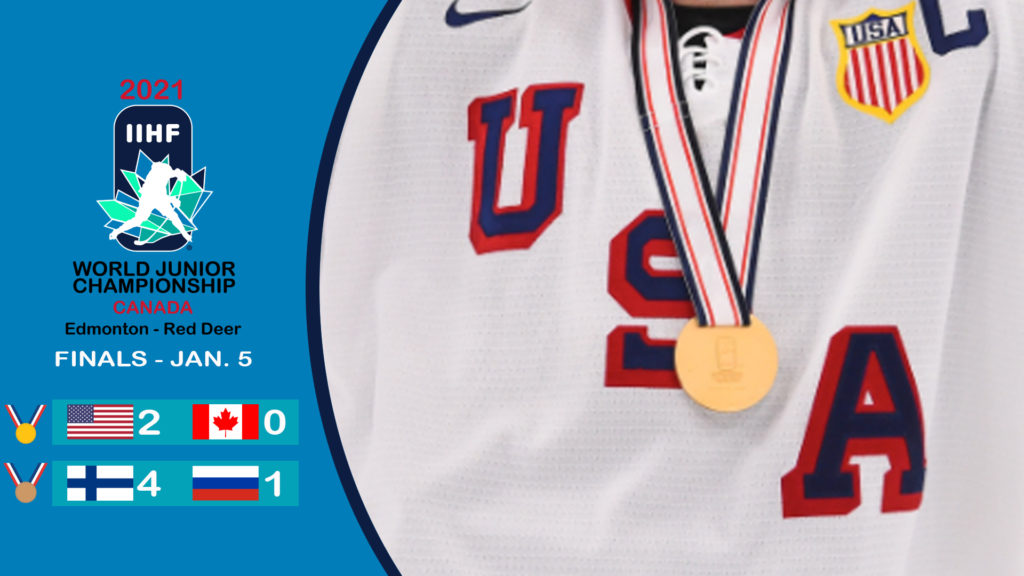 USA 2, CANADA 0 (GOLD MEDAL GAME)
Canada’s first loss of the tournament came in the finale as Team USA blanked them 2-0 to capture their fifth-ever gold medal at the World Juniors.

Fresh off a close 4-3 semi-final finish the night before, the Americans were in control early as L.A. Kings first rounder Alex Turcotte struck 13:25 into the opening period. Anaheim Ducks prospect Trevor Zegras then found the back of the net 32 seconds into the second frame to widen the U.S. lead to 2-0; one they’d hold on to until the final buzzer.

Canada outshot the USA 34-21 with chances aplenty but they were unable to get past netminder Spencer Knight, who earned his third shutout of the tournament. With an assist on Turcotte’s goal, Zegras finished out the game as the tournament’s leading scorer with seven goals and 11 assist for 18 points.

Tuesday’s loss marks the fourth time Canada has fallen to the U.S. in the gold medal game since 1997 and marks their first silver medal since losing to the Americans in 2017.

Captain Anton Lundell led his team to victory with a pair of goals. Ilya Safonov put the Russians up 1-0 in the first period and Lundell followed up with the tying goal in the middle frame. Mikko Petman pushed Finland in the lead 1:13 into the third period and a pair of empty net goals from Lundell and Juuso Parssinen secured the win.

Piiroinen totaled 28 saves while Russia’s Yaroslav Askarov solved 28 of the 30 shots he faced.

Finland’s third place finish marks their first return to the podium since winning gold in 2019 and their first bronze since 2006, while Russia was left off the podium for just the second time in 11 years.