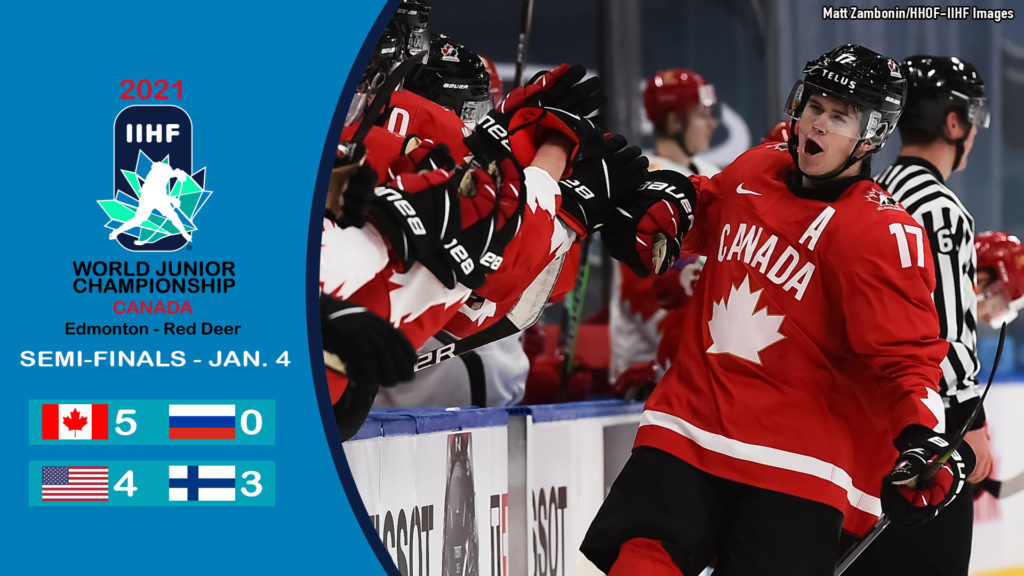 Canada was in control from the start, climbing out to a 3-0 lead after one period as Alex Newhook started things off with one that was counted after further review. McMichael connected with linemates Jakob Pelletier (Val-d’Or Foreurs) and Dylan Cozens (Lethbridge Hurricanes) before Perfetti snapped a wrister past Yaroslav Askarov with 4:55 remaining in the period.

Braden Schneider (Brandon Wheat Kings) stretched Canada’s lead to four 4:09 into the second before Cozens would finish things off with an empty netter late in the third period.

The Russians had an opportunity to climb back into the game late in the second, but a goal was waived off following a successful Canadian coaches challenge by Andre Tourigny (Ottawa 67’s) and his staff, with the play in question being ruled offside. That’s as close as the Russians would come as Canada held on for the shutout.

Netminder Devon Levi posted a 28-save shutout, becoming the second Canadian World Junior goaltender to do so after Justin Pogge last accomplished the feat in 2006.

Canada advances to take on continental rival the United States for gold on Tuesday at 9:30pm ET while Russia will take on Finland in the bronze medal game at 5:30pm ET.

The Finns recovered from a two-goal deficit for the second straight game before Kaliyev’s hard wrister from the high slot beat goaltender Kari Piiroinen (Windsor Spitfires) over the glove, setting the stage for a Canada/USA gold medal finale.

Finland came out with jump in the third period, drawing even on goals from Simontaival and Roni Hirvonen in the latter half of the frame. Turcotte would find an open Kaliyev for the deciding goal under three minutes later as the Americans punched their ticket to the gold medal game for the second time in three years.

Finland outshot the U.S. 36-26, with Piiroinen finishing the night with 22 saves opposite Spencer Knight who turned aside 33.

The Finns will face Russia for bronze on Tuesday at 5:30pm ET. They fell to Sweden in last year’s bronze medal game, placing fourth in Ostrava and Trinec.

The U.S. prepares to square off with Canada for gold on Tuesday at 9:30pm ET. They last captured World Junior supremacy in 2017.

It’s never too late for an Arty Party 🥳