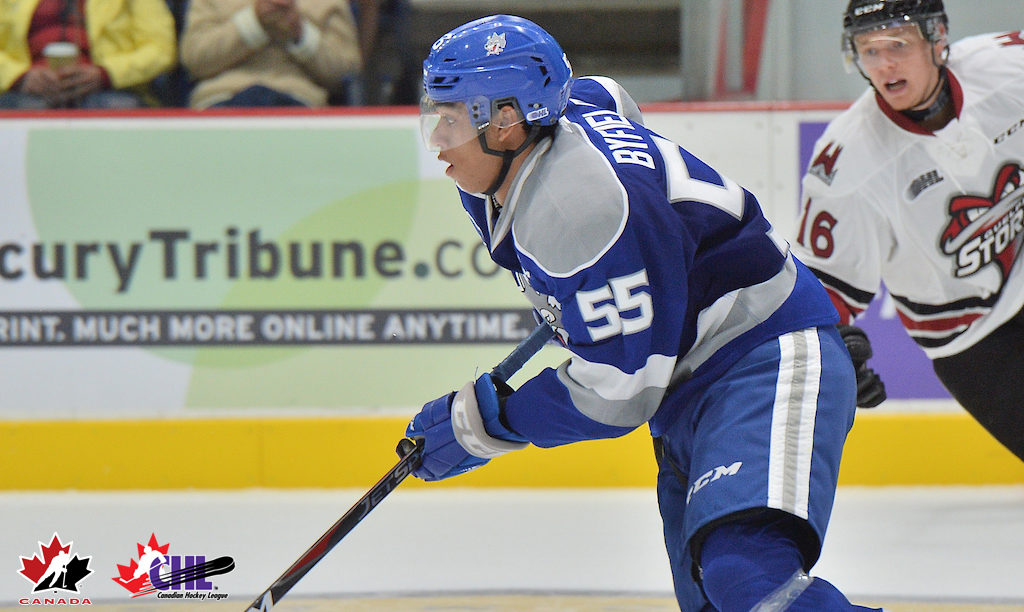 Quinton Byfield knows what to expect.

After attending last summer’s development camp then skating with Team Canada Black at the 2018 World Under-17 Hockey Challenge, the product of Newmarket, Ont., has a solid understanding of the expectations that come with being a part of Hockey Canada’s Program of Excellence.

One year later, Byfield is joined by 41 invitees from across the Canadian Hockey League who this week are participating in the under-18 selection camp ahead of the 2019 Hlinka Gretzky Cup, beginning Aug. 5 in Czech Republic and Slovakia.

“I know what they want to see now. They want us to play the Canadian way, they want to see us involved. You have to play a 200-foot game,” Byfield told the Canadian Hockey League. “I’ll be involved everywhere on the ice. I think I learned a lot from last year. I just want to give it my all, and hopefully be a leader on the team. I’ll be one of those guys who they can lean on in the tournament, if I make the team.”

Byfield heads to the Calgary-based camp following a dominant debut season in the Ontario Hockey League that saw the budding centre finish with 29 goals and 32 assists for 61 points across 64 appearances as he was later recognized with both OHL and CHL Rookie of the Year honours. Meanwhile, his return to the national stage gives hockey fans from coast to coast another opportunity to take in the tantalizing talent who projects as an early selection in the coming 2020 NHL Draft.

“I try not to think about it too much,” Byfield said of his looming 2019-20 draft season. “I didn’t think about my draft year in any other years so why should I think about it this year? I train every day with Gary Roberts. He always gets me the right nutrition and the right workouts. He knows how to train people for later-on success.”

With the Wolves, Byfield put together a formidable freshman campaign that helped the club win a playoff series for the first time since 2013, a season in which Byfield feels he grew from a player strictly focused on offense before rounding out the other parts of his game.

“It all starts from my coaches. Early on in the season, I was getting opportunities, but not defensive opportunities. They told me that I have to change my game a little,” explained Byfield, who compares his remodeled playing style to that of Anaheim Ducks captain and Calgary Hitmen graduate Ryan Getzlaf. “The awards I won, the credit definitely has to go to them because I changed my game from just being an offensive forward to playing a 200-foot (game). They gave me a lot of trust in playing penalty kill, last minute situations both offensively and defensively, (and) going out for defensive zone draws.”

The 2019 Hlinka Gretzky Cup marks the latest new experience for Byfield following a hectic year in which he not only went first overall in the 2018 OHL Priority Selection and made the immediate jump to the junior ranks, but also his first opportunity to pull on the Team Canada sweater as a part of the U17 squad, a memory he recalls vividly.

“It was definitely cool representing your country for the first time. When you’re a little kid, you’re always watching those world junior moments and wanting to be in their spot, and this is just one step closer,” Byfield added. “It’s really cool and something you want to keep striving for as you go on from the U17s to the world juniors.”