Wolves’ Goyette a positive presence on and off the ice 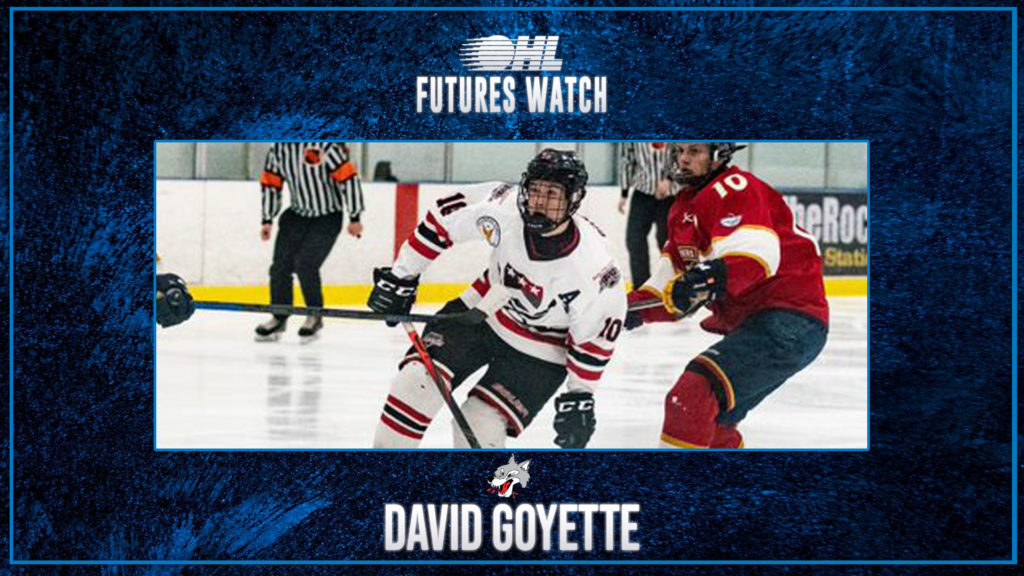 When David Goyette is on the ice, good things happen.

The Hawkesbury, Ont. native is an offensive threat who looks up to a player like Evgeny Kuznetsov. By the way he makes plays and always has the puck on his stick, it’s easy to see that he models his game after Auston Matthews as well. At the same time, he’s also good in his own end.

The Sudbury Wolves first rounder has a lot to offer that has left Wolves GM Rob Papineau excited about the player he was able to grab 11th overall at the 2020 OHL Priority Selection last spring.

“Remember that old saying ‘he’s got eyes in the back of his head’? Well David has a real sixth sense on the ice with the puck,” said Papineau. “He’s just a guy who has really great sense and all the skills to go with it. He can really skate, he’s always around the puck and he always makes things happen.”

Goyette led the South Kent Selects Academy U15 group with an incredible 49 goals and 153 points in 65 games over the 2019-20 season. Those numbers speak for themselves, but it’s more than just his on-ice production that has impressed the Wolves organization from the start.

“It’s been nothing but a pleasure with David, right from the first conversation we had and the interview before the draft, to the moment we were able to pick him. Everything’s always been positive with him. He just has such a passion for the game and the feedback he’s getting from coaches is also encouraging,” continued Papineau. “It’s not just great talent, it’s that feedback he gets about how hard of a worker he is in practice and how committed he is. Even though he was picked 11th overall in the best development league in the world, he doesn’t wear that. He just goes about his business and jut wants to be the best player he can.”

Awaiting word on the 2020-21 OHL season, Goyette has been spending a lot of time in the gym and has been able to get on the ice with the CCHL’s Hawkesbury Hawks Jr. A club. This past summer, he ran track and field to maintain his speed.

“I’ve been trying to gain weight and transform it into speed and just try to get faster every day because guys at the next level are fast and strong,” he said of his off-ice preparation. “It’s a fast-paced game, I’m just trying to get ready for that and hopefully it will pay off soon.”

COVID-19 regulations have kept the 17-year-old forward from heading to Sudbury just yet, but since hearing his name called out last April, Goyette has kept in touch with many of his older teammates including Blake Murray, Owen Robinson and Chase Stillman.

“He’s a great guy. I talk to him regularly,” he said of Stillman. “We’ve developed a nice relationship and I’m looking forward to meeting all the players on the team.”

It comes as no surprise to Papineau that, despite the circumstances, Goyette is settling in well.

#OHL Futures Watch 👀:@Sudbury_Wolves first round #OHLDraft pick David Goyette (@DavidGoyette14) joined @sarahjeanmaher for some rapid fire Q&A detailing his love for the @Senators and how his game stacks up with the talented @Kuzya92 🎥 pic.twitter.com/mFWURUkJvb

“It’s a credit to David but it’s also a credit to our veteran players. One of the things I think we’ve done a really good job at here in Sudbury, and that [Cory Stillman] was a big part of, was creating that culture,” he said. “Blake Murray experienced it with guys like Michael Pezzetta; they were veterans and they were there for him and now they just naturally know it’s their turn to make sure they’re there for the younger guys. We’re really proud of that. We have a really good dressing room, the guys are in it together, and no question about it, David’s embraced it and has been a great part of it.”

As he prepares to don the Wolves jersey in his OHL debut, Goyette has a good idea of how he plans to make an immediate impact with the reigning Central Division champions.

And coming off that remarkable (albeit, unsurprising) 153-point season, he knows a thing or two about leadership as well, and can’t wait to be that positive presence in the dressing room.

“I’m always trying to be the guy who works hardest. I think I lead by example and I always give my 100%,” he said.