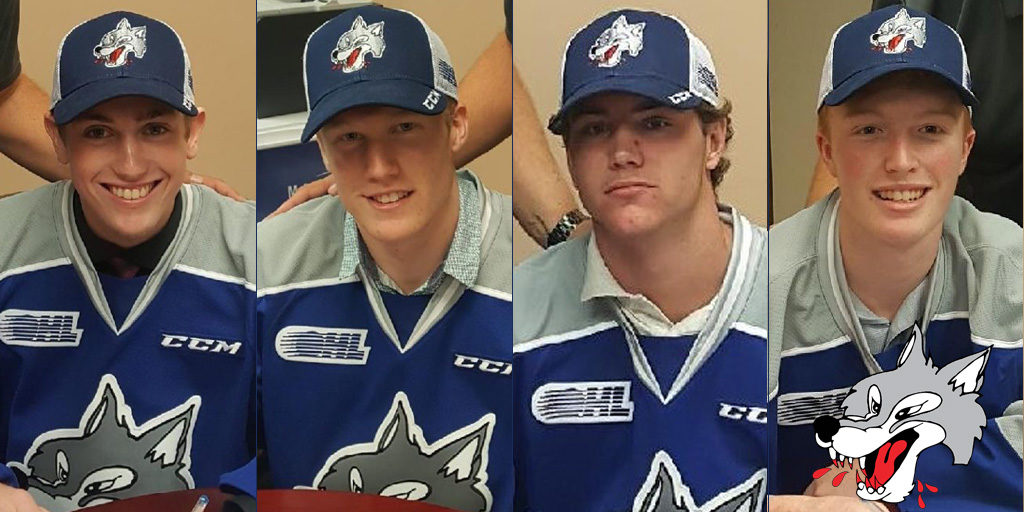 A 17-year-old defenceman from Oakville, Ont., Serensits spent last season with the Oakville Rangers Midget team where he recorded 11 goals, 25 assists and 36 points in 50 games. The 6-foot-1, 183Ib. right-hand shot also appeared in three games as a call-up with the Oakville Blades Jr. A club.

“We are thrilled that Emmett has chosen the Sudbury Wolves hockey club,” said Rob Papineau, Sudbury Wolves VP of Hockey Operations and General Manager. “He was our first pick in the U18 draft and clearly demonstrates that there are many paths to the Ontario Hockey League for all players coming out of Major Midget. He had an excellent training camp and was a guy our staff felt very high on through this entire camp,” he added.

A 17-year-old left-winger from Kingston, Ont., Hutcheson spent last season with the Greater Kingston Frontenacs Midget team where he registered 26 goals, 18 assists and 44 points over 36 games. The 6-foot-4, 194Ib. forward also appeared in some late season and playoff contests with the Kingston Voyageurs Jr. A club.

“Nolan showed great progress and development since last year’s camp,” noted Papineau. “He did everything asked of him and was a factor in each game during this year’s camp.”

A 17-year-old right-winger from LaSalle, Ont., McConville spent last season between the Essex 73’s Jr. C team and the LaSalle Vipers Jr. B club. He registered 10 goals, 17 assists and 27 points in 31 games with Essex and recorded one assist over 13 regular season contests with LaSalle. The 6-foot-2, 205Ib. winger also appeared in eight playoff matchups with the Vipers, recording two assists in the process.

“Blake brings tremendous speed down the right wing to our offence,” said Papineau. “He is a complete athlete and we feel this is an excellent signing for our hockey club.”

Lastly, the 16-year-old Bowen, a late 2000-birthday goaltender from Unionville, Ont. spent the 2016-17 campaign with the Markham Waxers Midgets where he posted a 1.36 goals-against average over 21 contests. David is the son of Toronto Maple Leafs voice, Sudbury native and former Wolves broadcaster Joe Bowen.

“David showed tremendous compete throughout both last year and this year’s training camps and earned his contract with our hockey club,” Papineau commented.

The Wolves currently feature 27 players on the roster including 15 forwards, nine defencemen and three goaltenders.