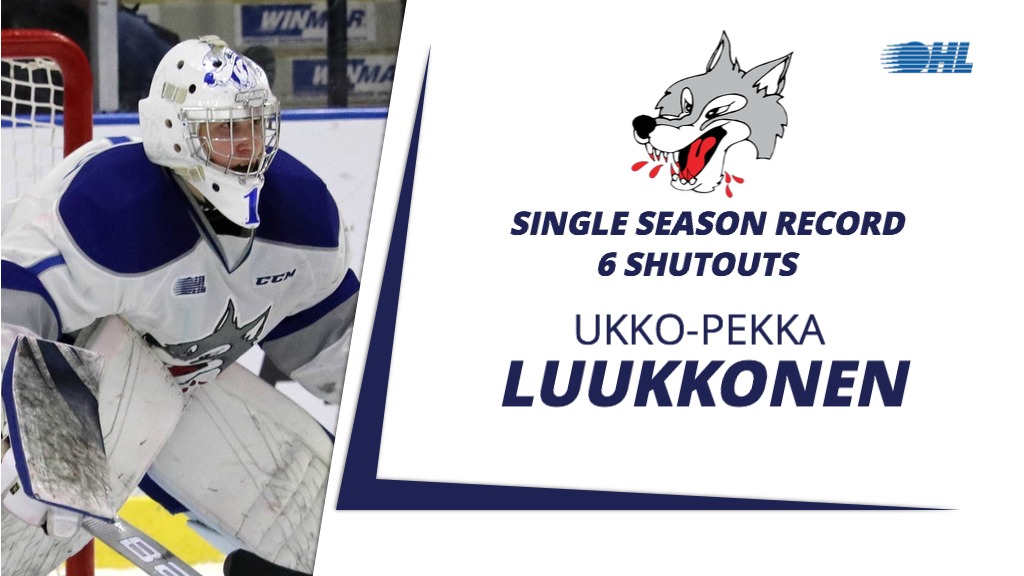 Ukko-Pekka Luukkonen celebrated his 20th birthday with one of his finest performances of the season on Saturday, turning aside 41 shots in a 4-0 shutout road win over the Hamilton Bulldogs.

After being blanked in Niagara on Friday the Wolves rebounded thanks to Luukkonen’s franchise single season record sixth shutout  to remain within striking distance of the IceDogs in their pursuit of Central Division supremacy.

Tonight was a #MilestoneMoment for @ukkopekkaluukko who broke the franchise record for most shutouts in a season and tied the franchise for most in career with 6! Congrats! 👏🏼👊🏼 pic.twitter.com/IR6z8HE3V5

A second round pick of the Buffalo Sabres in 2017, Luukkonen has had a year to remember. The 6-foot-5, 214Ib talent backstopped his native Finland to gold at the 2019 IIHF World Junior Hockey Championship in Vancouver, being named to the tournament all-star team.

Luukkonen has appeared in 50 of Sudbury’s 65 games so far this season, the most by a Wolves goaltender since Palazzese suited up in 60 during the 2013-14 season. He leads the OHL with 36 wins and is tied for second most in franchise history with Don Beaupre who went 36-16-1 during his 1978-79 rookie season. Luukkonen’s 2.45 goals-against average and .921 save percentage are both league leading figures.

The Espoo, Finland product was the third overall pick of the 2018 CHL Import Draft after spending last season with LeKi of Finland’s Mestis circuit.