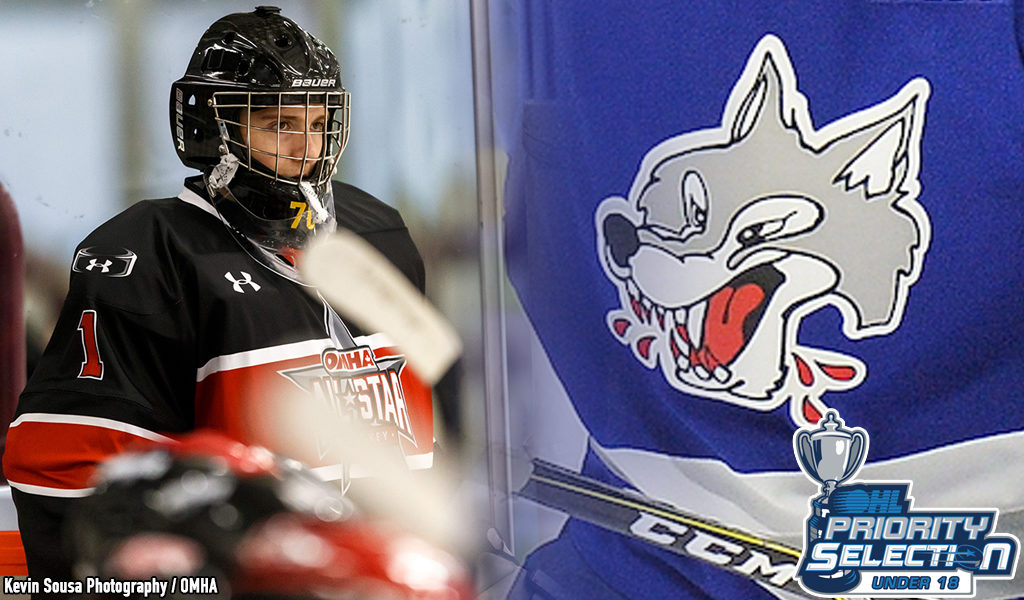 A total of 53 players were chosen in Wednesday’s OHL Under-18 Priority Selection and the first was a goaltender.

“It’s kind of surreal I guess, just exciting, nervous and everything all at once that comes at you,” he said after learning the news. “After not being drafted last year it’s definitely been worth the wait. I had a lot of fun playing in North Central this year and feel like my game really took a big step forward.”

Weeks played his minor midget hockey with the Barrie Jr. Colts in 2016-17, catching the attention of GM Rob Papineau and his staff in Sudbury who kept tabs on the 6-foot-1 goaltender and made him their first overall pick a year later.

“Mitchell is a player that we really liked in last year’s draft when he played for Barrie,” said Papineau. “This year he had a significant growth spurt and a strong season with North Central where he was also named an ETA All-Star. He is big and agile and reads the play well. He also has good control of his rebounds.  He is very competitive and thrives on one-on-one challenges.”

Weeks was the first of 13 goaltenders selected over the opening two rounds of the Under-18 Priority Selection after recording a 2.92 goals-against average and four shutouts over 23 games with North Central this past season.

“I’d just like to thank my coaches and teammates from this season,” he added. “We all worked really well together and it was a really fun season.”

Weeks has already been contacted by fellow Wolves first overall pick Quinton Byfield who passed along his congratulations as the two get to work this offseason in an effort to jumpstart a rebuilding Wolves organization in 2018-19.

Another up-and-coming group, the Flint Firebirds held the second overall pick and selected Toronto Nationals forward Markus Paterson. The 6-foot-2 left-winger was an OHL Cup Finalist with the Toronto Nationals last season before being selected in the eighth round of the 2017 OHL Priority Selection by the Windsor Spitfires. Left off Windsor’s 50-man protected list, he became eligible for Wednesday’s event.

“It’s exciting to be able to join the Firebirds,” said Paterson. “I had a thought I might get picked tonight but didn’t really know where I’d end up. I’m really happy with how everything worked out.”

Paterson has helped the Nationals Midget AAA team win both a GTHL Championship and OHF title this season as they prepare for the 2018 Telus Cup National Championship that gets underway in Sudbury, Ont. on April 23rd.

Paterson, who played alongside Firebirds forward Ethan Keppen in minor midget, has been contacted by several of his past teammates congratulating him on the selection.

“It’s really cool. It’s great to see a lot of my minor midget teammates succeeding and it means a lot to have their support tonight.”

“We’re all excited, my whole family,” said Hutton on Wednesday. “I was so proud of our team and am really thrilled to see D’Amato go one pick after me because we had a lot of fun playing together this season.”

Hutton, who played alongside OHL forwards Nick Wong (Oshawa Generals) and Anthony Tabak (Sudbury Wolves) with the Mississauga Senators last season, says he’s eager to get to work this summer.

“It’s an honour to be selected by an organization like Peterborough and I really hope I can make a difference for them,” he said. “I like to play offensively and use my creativity, but I’m working hard to get stronger over the summer so I can be ready for camp.”

The first round featured a total of eight goaltenders, six forwards and six defencemen, contributing to a total of 27 forwards, 13 defencemen and 13 goaltenders taken in the 2018 OHL Under-18 Priority Selection.

The second edition of the annual event that saw OHL member teams select top talent from Ontario Midget AAA programs. Keep an eye on these young players as OHL spring development camps get underway over the next several weeks.