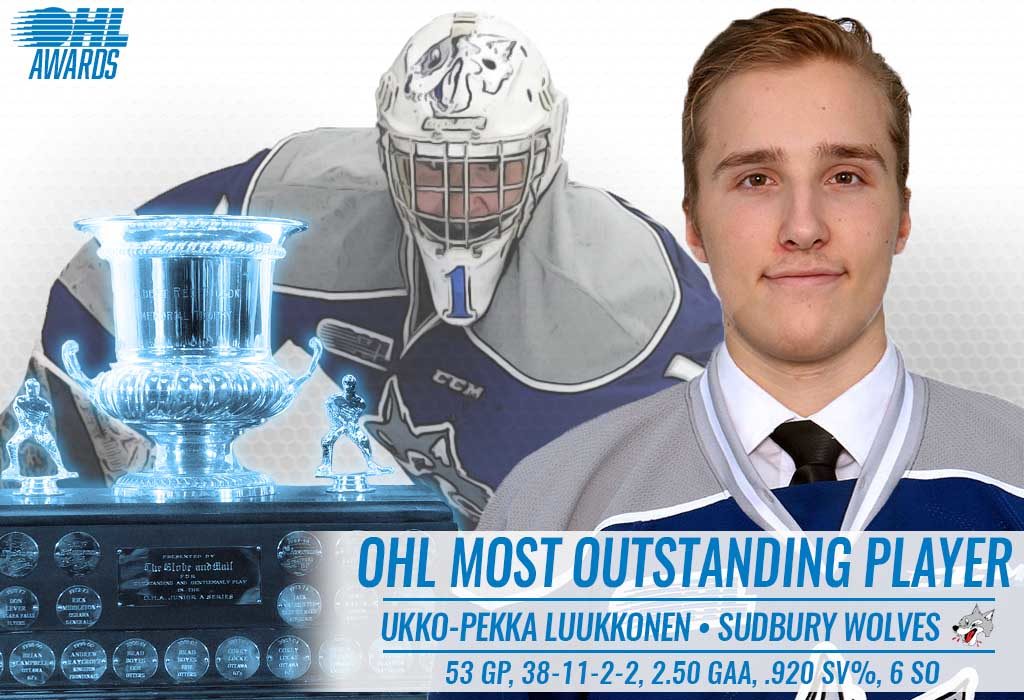 Toronto, ON – The Ontario Hockey League today announced that Buffalo Sabres prospect Ukko-Pekka Luukkonen of the Sudbury Wolves is the 2018-19 recipient of the Red Tilson Trophy awarded to the OHL’s Most Outstanding Player of the Year as voted by the writers and broadcasters that cover the league.

Luukkonen becomes the sixth goaltender to win the award and the first member of the Wolves to be honoured in 40 years since Mike Foligno was the club’s first award recipient back in 1979.  The Finnish netminder is also the first European import player to be recognized.

“I am so honoured to have been named the Red Tilson Award winner,” Luukkonen said. “There are so many great players in the OHL who could have won this award and I am humbled to have been chosen. I want to thank the Sudbury Wolves organization for giving me a chance to play. I want to especially thank my teammates, Owner Dario Zulich, GM Rob Papineau, and my coaches, including goaltender coach Alain Valiquette and trainer Dan Buckland, for everything they have done for me.”

Luukkonen backstopped the Wolves to their most successful regular season since 1994-95.  In their crease he tied for the league lead with 38 wins and six shutouts while posting the OHL’s third best goals-against-average with a mark of 2.50 and the best save percentage at .920.  His GAA, SV%, and shutout total established new franchise records while his 38 wins are the second most in a single season in franchise history behind only Jim Bedard who won 40 games in 1975-76.

“Ukko had a remarkable and memorable season for the Sudbury Wolves in so many different ways,” said Wolves Vice-President and General Manager Rob Papineau. “To be recognized by the OHL writers and media as the winner of the prestigious Red Tilson Trophy as the OHL’s most outstanding player is so deserving and outstanding for him. As the season went on, so many people would talk about how great of a goalie Ukko is but this award is really special as it recognizes that he is in fact the most outstanding player in the OHL at any position. When you get to know him, Ukko really is the most outstanding player, goalie, and person, and he truly does deserve this great award.”

The 20-year-old from Espoo, Finland, began his OHL career on September 28 just three months after being chosen third overall in the 2018 CHL Import Draft.  He won his first five regular season starts and would later produce impressive winning streaks of 11 and eight straight games throughout 2018-19 compiling an overall record of 38-11-2-2.  His efforts helped the Wolves finish second in the Central Division standings with 43 wins and 91 points.  This season Luukkonen was also selected as the OHL’s Goaltender of the Year in a unanimous vote by the league’s General Managers and represents the club as a first time recipient for that award.

“Ukko is an elite goaltender and a terrific young man,” said Wolves Head Coach Cory Stillman. “From the start of the season he was our best player in almost every game. He has a calm confidence about himself that allows him to control the outcome of a game. Ukko has all the tools to one day be a star in the National Hockey League.”

The second round pick by the Sabres in the 2017 NHL Draft signed his entry-level contract with the club back in June, 2018.  In January, Luukkonen won gold for Finland at the 2019 IIHF World Junior Championship and was voted to the tournament’s All-Star team.  Following the OHL season he made his American Hockey League debut stopping 32 shots on April 14 in a victory for the Rochester Americans.

“We are very excited that Ukko-Pekka has been named the Ontario Hockey League’s Most Valuable Player,” Buffalo Sabres Assistant General Manager Steve Greeley said. “We are very happy with his development and growth within the opportunity that he was given by the Sudbury Wolves and the OHL during this past season.”

The Red Tilson Trophy is the most prestigious individual award presented by the Ontario Hockey League.  First presented in 1945, the trophy is named in honour of Albert “Red” Tilson, who was killed in action in Europe during World War II. Tilson was the OHA scoring champion for the 1942-43 season after scoring 19 goals and 38 assists for 57 points in 22 games with the Oshawa Generals.

Accredited media were asked to select their top three choices from the 20 nominees submitted by all 20 member clubs.  Players received five points for a first place selection, three points for second place and one point for a third place selection.  Luukkonen received 201 points in the voting process appearing on over 80% of the ballots cast.  Overage Player of the Year Justin Brazeau of the North Bay Battalion finished in second place with 127 voting points, followed by OHL Top Scorer Jason Robertson of the Niagara IceDogs who received 123 voting points.