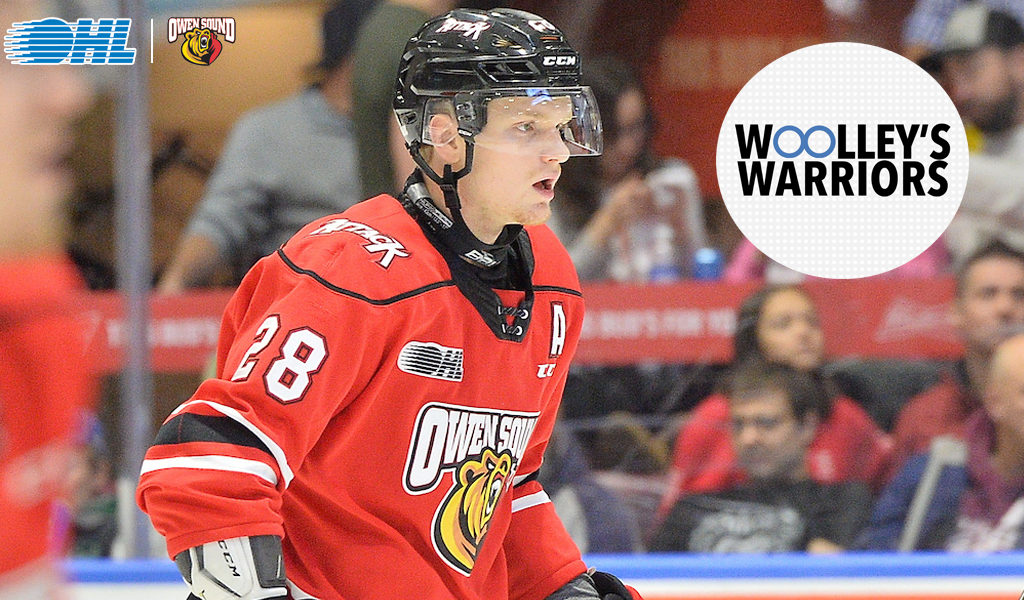 Mark Woolley never envisioned what was to come when he launched Woolley’s Warriors last August. If you had told him he’d be sorting and labelling hoodies, making runs to the bank, and figuring out the best methods of distribution, he might be wondering how he’d fit it all in with his busy hockey schedule and a co-op placement at the local fire department. But through it all, the 18-year-old has handled his new foundation with grace beyond his years. In the first six months, Woolley’s Warriors was able to raise over $35,000 for Diabetes Canada with the help of Attack fans and the community at large. Now at the end of the 2019-20 season, with over $40,000 raised to send young children with Type 1 Diabetes to D-Camp, he looks back at it all with a smile.

“The response to Woolley’s Warriors has been outstanding.” Woolley says. “From all aspects, including my family, friends, teammates, coaches, the ownership group and the amazing fans here in Owen Sound.” But it’s not just the local fans that have been giving their support. People have reached out from as far as Ottawa with messages explaining what WW means to them. The defenseman says: “It’s exceeded all expectations in every way and none of that would have been possible without the amazing support from everybody involved.”

While @AttackOHL defenceman @woolbanger20x has inspired many through his @WoolleyWarriors initiative, he’s also looked up to players on his journey with Type 1 diabetes, most notably #OHL grad @max_domi.

The money raised has been impressive for Woolley, but he’s doing it for the community. He says the best part of the experience has been giving back to the community and connecting those who live with the same struggle that he does. “Being able to see all the smiles on kids faces that have attended one of our games as a ‘Warrior’ really brings me joy. Seeing the happiness from the kids reminds me every time why I do it.” he says. He knows exactly why it matters so much to him: “These kids need to realize it’s okay to be different and I’m doing as much as I can to prove that to them.” This season Mark has brought ten ‘Warriors’ to games, where he provides tickets for the family and then meets up after the game to chat with the family and how to live with Type 1 Diabetes.

People always say that ‘Hockey Is More Than A Game’. Woolley started the foundation with that in mind, but it wasn’t until things got underway that he really understood what it meant: “Some people don’t understand the opportunity you have while playing in the OHL and I wanted to make the most of my time in the league to make a positive impact in the community. Seeing others so happy just from us giving back to the community really is something special to me.”

The St. Thomas native has one message for those who want to make a difference themselves: “Always put yourself in other peoples shoes. How would it have felt if somebody did something like that for you when you were a kid? Just like giving a kid a high five coming off the ice. It may not seem like that big of a deal, but those small gestures mean everything.”

His Head Coach, Alan Letang, has noticed the impact Woolley brought to Owen Sound: “Mark brings the exact same passion he has on the ice as he does off. He’s a player that comes to the rink everyday wanting to get better and help people around him get better. He sacrifices his body by blocking shots and playing a heavy game.” He adds: “Off the ice his leadership and selflessness shows by his commitment to Woolley’s Warriors. He’s the perfect example of what our organizations values and the kind of culture we want to build in Owen Sound.”

It’s making an impression among his peers, too. Attack captain Aidan Dudas says: “Mark is such an incredible young man, I can’t imagine how hard it can be sometimes to live with diabetes, let alone be a high performance athlete with diabetes, and focus on your own health while giving back to so many kids around Ontario with diabetes. What he has done for Woolley’s Warriors and many kids living with diabetes is incredible, But that is just the type of guy Mark is, he always wants to help others.”

What’s next for Woolley’s Warriors? Mark says: “We’ve got a lot of ideas in our back pockets. Nothing is confirmed right now, but we’ve got a lot of possibilities. We want to get involved with the DSkate program and potentially be a guest at one of those camps There’s lots of things to come for Woolley’s Warriors and I can’t wait to see what the future has in store.”

To learn more about Woolley’s Warriors, or to make a donation, visit: WoolleysWarriors.com.