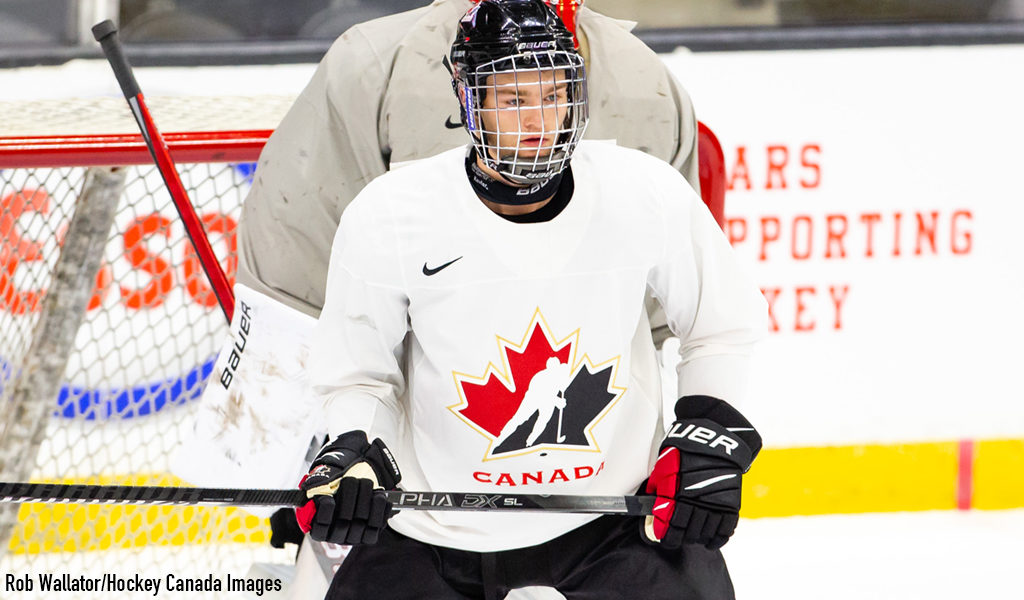 Included in that talented crop is Kingston Frontenacs forward Shane Wright who, at 16-years-old, is used to being the youngest player on his team by now.

But the up-and-coming talent continues to put truth to the words he spoke last season shortly after he was granted the “A” on his jersey days before his 16th birthday: leadership doesn’t necessarily have anything to do with age.

So when he stepped into the locker room in Red Deer, Alta. for his first day of World Junior camp, it’s no wonder his excitement overcame his nerves.

An honour and a dream come true for a player who, like most aspiring young Canadian hockey players, has fond memories of watching the tournament during the holidays with his family. In fact, it wasn’t just a holiday tradition, but a birthday tradition as well for the January 5th born skater.

“It’s something I grew up watching and have been watching every single year,” Wright said.

Of course, cracking the lineup at 16-years-old would put him in an exclusive high-calibre club that incudes the likes of Wayne Gretzky, Sidney Crosby and Connor McDavid.

#OHL Rookie of the Year Shane Wright (@shane_wright51) of the @KingstonFronts describes the honour of being at #WorldJuniors Camp and what it would mean to follow in the footsteps of past 16-year-old @HC_WJC representatives like Gretzky, Crosby and McDavid 🎥 pic.twitter.com/pK2kbFZmM6

“If I’m lucky enough to make the team it’d be really special to me and such an honour to me to be in the same category as those guys,” he continued.

Coming off his record-setting 39-goal, 66-point rookie season with the Frontenacs, the exceptional talent touts his hockey IQ, ability to make smart plays and knack for reading his teammates and opponents as his biggest standout features.

His talents are no surprise to Tourigny, who has seen his share of Wright over the past season during Ottawa and Kingston’s six East Division meetups and can speak thoroughly to his progression.

A self-described perfectionist who doesn’t like feeling complacent with his game, Wright spent the summer at the gym building up his strength and muscle mass. He focused on being able to compete with stronger, older players down low in the corners and being able to push guys off pucks.

His ability to score when he needs to and make the best of any playmaking opportunity left an impression with his opponents, including London Knights forward and returning Team Canada player Connor McMichael.

“He’s just an unbelievable player. Coming as a 15-year-old turning 16, it was awesome to play against him. Just how mature and sound he is on the ice is unbelievable,” said McMichael. “Playing the first game against him in October and then the last time we played them around February, he developed a lot and he got a lot bigger and stronger. He’s just a tough player to play against and he’s unreal.”

Back-to-back #OHL Coach of the Year Andre Tourigny has seen plenty of @KingstonFronts phenom Shane Wright (@shane_wright51) in his time behind the bench with @Ottawa67sHockey. The @HC_WJC head coach spoke highly of the 16-year-old on Day 1 of #WorldJuniors Selection Camp 🎥 pic.twitter.com/0gWmjmX4t2

During the camp, Wright is rooming with another returning Team Canada skater in Bowen Byram, who is looking forward to getting to know the 16-year-old phenom.

“I got to know him a bit already throughout the first day here. I think the first thing I noticed was how strong he is, how mature he is,” said Byram.

Tourigny says rooming with the Colorado Avalanche first rounder can only be a positive for Wright and hopes it will help him “loosen up a bit.”

For Byram, it’s an opportunity to help out the newcomer where possible.

“The biggest thing that I‘ve told him so far is to enjoy himself and not put too much pressure on himself. He’s here for a good time,” he continued. “I’m sure if he works his hardest and he’s confident on the ice he’ll out himself in a good position.”

For Wright, it’s an opportunity to learn and have fun, which appears to be exactly what his coach had in mind.

“It was actually Bow who to told me to hop in the middle and lead the stretch for the boys. I just took his lead and led the stretch for everyone,” said Wright. “He’s a fun guy to be with, a funny guy to be around and talk with, he’s got some funny stories as well. I’m pretty lucky to have him as a roommate.”