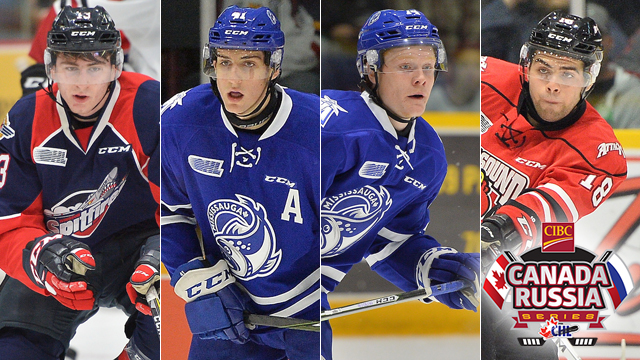 The 2016 CIBC Canada Russia Series comes to Ontario this week and four 2017 NHL Draft prospects will be looking to lay hold of the tremendous opportunity that lies before them.

The choice to include the four NHL Draft targets in the series was an easy one according to Owen Sound Attack general manager Dale DeGray, a member of Hockey Canada’s Program of Excellence Management Group who served alongside Guelph Storm GM Mike Kelly on the team selection committee.

“These are four very talented players,” said DeGray, “guys who have earned the opportunity to represent the league and put their skills on display in the CIBC Canada Russia Series.”

Vilardi, Hague and Tippett were each ‘A’ rated skaters in NHL Central Scouting’s October Players to Watch List. They’ll suit up on Thursday in North Bay for Game 3 of the series.

“It’s a great opportunity for me to show what I can do,” said Vilardi, who missed the early portion of the season after suffering a knee injury at Canada’s Ivan Hlinka Memorial Tournament selection camp. “First things first though, we have to win the game. If we as a team have success I think everyone has a better shot of having individual success.”

Vilardi, who has 17 points (7-10–17) over 11 games in Windsor this season, earned high praise from DeGray for his intelligence on the ice.

“I’ve been watching Gabe for a number of years and he’s a very smart player and the hype that surrounds him is definitely warranted, no question. It’ll be interesting to see him on a big stage like this.”

An offensively-gifted forward like Vilardi, Mississauga Steelheads winger Owen Tippett has filled nets around the league as a 17-year-old, potting 16 goals and 21 points over 17 games this season.

“My coaches in Mississauga have been great this year in encouraging me to find those high percentage areas where I can find different ways to produce,” said Tippett. “Every opportunity you get to represent Canada and the OHL is a special one, and something that you can learn from.”

Steelheads teammate Nicolas Hague, a late-1998 born 6-foot-5, 216Ib. defenceman joins Tippett in the lineup. The rangy blueliner has impressed with his multi-dimensional game this season, leading OHL defenders with eight goals to go with seven assists for 15 points over 16 contests.

“When you watch Nic play, it’s easy to forget that he’s up for the draft this year because he plays with the confidence and composure of someone much older,” DeGray noted. “He’s very polished and his skating ability for a player of his size puts him in the category of a player that NHL scouts are certainly going to be keeping their eye on.”

Seventeen year-old Markus Phillips, one of DeGray’s Attack blueliners in Owen Sound, will slot into the lineup on Monday in Hamilton.

“Markus was a guy who made a great impression at the World Under-18 Hockey Championship as an underage player last spring. He showed that he is capable of playing against guys older and bigger than him and this is just another opportunity for him to show that he can be a good support piece in a talented Team OHL defence corps.”