Youngest of Carrick quartet running with the Colts 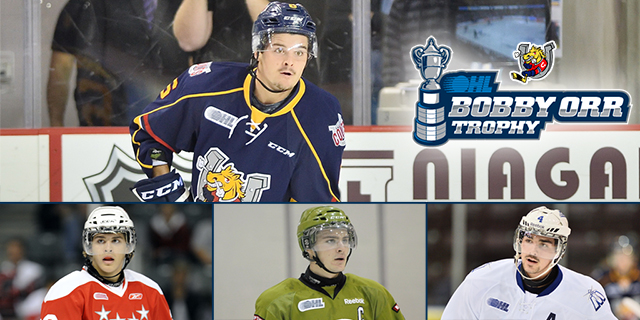 Being the youngest of four brothers brings with it its share of hard knocks. Nineteen year-old Barrie Colts defenceman Josh Carrick knows this all too well.

For each of the past nine seasons, at least one of the four Carrick brothers has skated in the Ontario Hockey League, each with their own unique skills and identities.

Jake Carrick broke into the league with Sault Ste. Marie in 2007, spending four seasons with the Greyhounds before a final playoff run with the Windsor Spitfires during his overage season.

Younger brother Sam Carrick, a first round pick of the Brampton Battalion in 2008 followed suit, playing a 254-game career with the Troops before graduating as captain at the end of the 2012 season. After being a fifth round pick by the Toronto Maple Leafs in 2010, the second Carrick brother remains in the Leafs organization, spending much of the 2015-16 season with the AHL’s Toronto Marlies.

Two years younger than Sam, 6-foot-2 defenceman Trevor Carrick entered the league in 2011, playing parts of three seasons with the Mississauga Steelheads before ending his OHL tenure in Sudbury. Trevor was a fourth round pick by Carolina in 2012 and comes off a 42-point (9-33–42) season with the AHL affiliate Charlotte Checkers in 2015-16.

Now comes Josh, the youngest of four boys spread out over a span of six years. The third-year blueliner enters the Eastern Conference Finals with the Barrie Colts this week looking to become the first of the Stouffville-based clan to hoist the J. Ross Robertson Cup. There’ve been three prior Conference Final appearances (Jake with Sault Ste. Marie in 2008 and with Windsor in 2011 as well as Sam with Brampton in 2009) in the family while Sam lost in the OHL Finals to Windsor as a rookie with the Brampton Battalion in 2009.

“It’d be something special, that’s for sure,” said the youngest Carrick. “You couldn’t ask for a better team to play for. The Barrie Colts, from top to bottom, are a first class organization and one that I’m very thankful for. We’ve got talent in all areas and I think we’re built for success. A championship would be a first for our family and I’m hopeful that I can play a part with the Colts in us getting there.”

Better known for his competitiveness and tenacity on the ice, Carrick came through with his first career multi-goal game in Barrie’s 5-2 Game 1 victory over the North Bay Battalion on April 7th. The Colts proceeded to sweep the Battalion in their second round series that ended on Thursday, getting redemption after suffering elimination at the hands of the Troops in both 2014 and 2015.

Carrick says his competitive nature on the ice began to take form at a young age.

“We grew up playing different sports together and I always got beat up,” he said with a laugh. “My brothers were always bigger and stronger than I was, but a challenge was never something I wanted to back down from, so it’s definitely helped toughen me up over the years.”

The 6’0″, 184Ib. defenceman says he has learned something valuable from each of his three siblings.

“Jake was a lot like me,” he said. “He had to work for everything he got because he wasn’t ever the most talented guy on the ice, but he wasn’t going to be outworked. Sam has a natural skill set and is a very smart player. He knows the game well and has always had a lot of eyes on him. Trevor was a late-bloomer who didn’t play Triple-A until he was in Major Peewee, but his love for the game and ability to keep improving have made him into a great defenceman.”

Countless hours on the road and at the rinks went into getting the four Carrick brothers into the OHL, a journey of growth and development sustained by parents John and Jane Carrick.

In addition to serving as founder and president of one of Canada’s leading asphalt mix providers in McAsphalt, an affiliate of Miller Paving Ltd., John Carrick has seen his share of hockey games over the years.

“It’s been a blur for sure,” he said. “My wife would typically drop them off at the rink for practice after school and I would go pick them up on my way home from work. There were times where we didn’t have a single night off throughout the week, one of them would either have a game or a practice every night.”

As the boys got older, they gradually made the shift from the OMHA’s Markham Waxers program to playing in the GTHL to cut down on travel. Jake and Sam were drafted as members of the Toronto Red Wings while Trevor and Josh played for the Markham Majors.

“They’ve all had their unique stories and paths that they’ve taken,” John continued, “but I think they’ve all been very hard workers wherever they’ve played and we’re proud of them for that. It’s a different experience watching two of your boys play against each other, you’re kinda cheering for both of them.”

The Carricks are the first four-brother combination to play in the OHL since Eric, Marc, Jordan and Jared Staal who were in the league between 2000-2010. Two other notable families with at least four brothers to have played in the league include the Hunters of Petrolia, ON (Ron, Dave, Mark, Dale – 1974-80) and the Linsemans (5) of Kingston, ON (Ken, Mike, Steve, John, Ted – 1974-87).

When comparisons to the Staals come up in conversation, the Carrick patriarch responds with some lighthearted humour.

“I like to think of our guys as closer to the Hansons,” he says with a laugh.

Wrapping up his 19-year-old season in the OHL, Josh Carrick isn’t sure what the future holds. He’s keeping his eyes on the task at hand: winning an OHL Championship.

“We’ll see how things go,” he said. “I’d like to see what my overage options are, but I’m also interested in using my education package and possibly getting involved in the family business like my brother Jake.”

Jake Carrick played four seasons at Lakehead University from 2011-15, graduating with a degree in Business and now works in the sales department at McAsphalt.

“I know the Ontario Hockey League has been good for all of us,” Josh concluded. “I know my parents put a lot of time and energy into getting us there and we’re all very appreciative of that.”

Josh Carrick and the Colts prepare for an Eastern Conference Final matchup with the Niagara IceDogs that gets underway on Thursday in Barrie.

The Barrie Colts are in the hunt for their first OHL title since 2000.