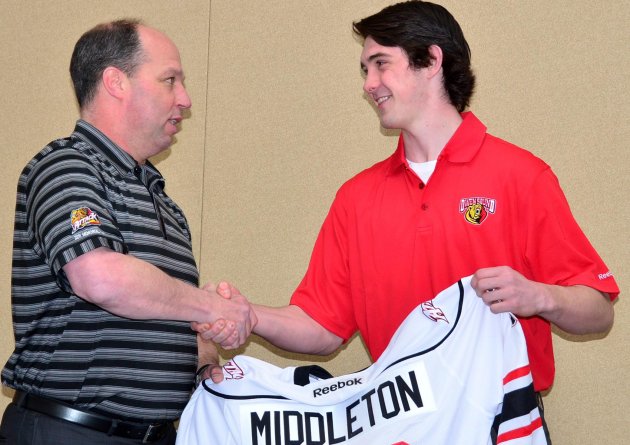 The Owen Sound Attack is pleased to announce that the Hockey Club has signed 2012 First Round Selection Jacob Middleton to an OHL Contract. Middleton was taken with the 8th overall selection in the 2012 Ontario Hockey League Priority Draft this past May.

Middleton, a defenseman from Stratford, Ontario played 55 total games with the Huron-Perth Lakers last season, compiling 12 goals, 29 assists and 60 penalty minutes to go along with a +20 rating. Jacob and his entire family was on hand this past Sunday to receive the Ray McKelvie Award as the Attack’s Top Draft Pick at the organizations annual awards BBQ and Banquet.

The 6’2, 185lb rearguard is described by OHL Central Scouting as a stud rearguard who is physically and mentally prepared to excel at the next level. He is considered a complete player who is big, strong, skilled, quick and smart player with exceptional mobility.

“We are extremely thrilled to officially welcome Jacob and his family into our organization”, stated Attack General Manager Dale DeGray. “He has the potential to be an elite defenseman in the Ontario Hockey League and we feel he brings a complete package of size, skill and strength to our back end.”

Middleton also suited up with the Huron-Perth Lakers Minor Midget team during the 2010-2011 season as an underage player, notching an assist in 7 games.

The Attack wishes to welcome Jacob and his family to the organization.