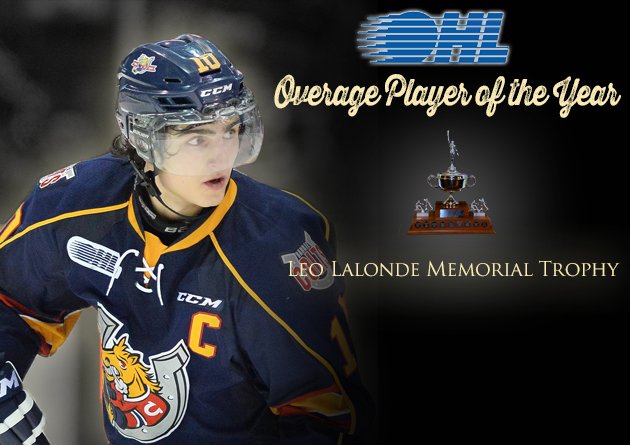 Toronto, ON – The Ontario Hockey League today announced that forward Joseph Blandisi of the Barrie Colts is the 2014-15 recipient of the Leo Lalonde Memorial Trophy awarded annually to the OHL’s Overage Player of the Year.

Blandisi finished fourth in league scoring with 112 points in 68 games played recording a league-high 52 goals.  He becomes the second member of the Colts to win the award following Bryan Cameron who was the 2009-10 recipient.

“It is a huge honour to win any type of award at this level of hockey and in a junior league with players of this calibre,” said Blandisi. “I couldn’t have done it without the support of my family, friends, teammates and coaches.”

A 20-year-old from Markham, ON, Blandisi played four OHL seasons beginning with the Owen Sound Attack who selected him in the third round of the 2011 OHL Priority Selection as a 17-year-old playing Midget AAA with the Vaughan Kings.  During his OHL career he also suited up for the Ottawa 67’s before joining the Colts midway through the 2013-14 campaign and has played a total of 246 career games recording 244 points including 108 goals and 136 assists.  2014-15 was a breakout campaign for the Colts’ captain shattering all previous offensive bests while posting a 62-point increase over last season’s total.  His point and goal totals this season rank second on the Colts single season record behind Sheldon Keefe’s 121 points in 2000, and Bryan Cameron’s 53 goals in 2010.

“It’s a great story coming off injury last season to OA of the year,” said Colts Head Coach Dale Hawerchuk. “He worked extremely hard in the off season and it paid off.”

Blandisi recorded 28 multi-point games this season including a pair of five-point contests highlighted by a four-goal game on February 22 against the Sudbury Wolves.  First in the OHL with 10 shorthanded goals, he was recognized as one of the game’s three stars 28 times this season including 11 first star honours which ranked fourth in the OHL.  He received OHL Player of the Week honours for the week ending October 5, and was recognized in the Eastern Conference Coaches Poll as Best Playmaker, third Best Skater, third Best Shot, and third Best Penalty Killer.  Originally chosen by the Colorado Avalanche in the sixth round of the 2012 NHL Draft, Blandisi signed a three year entry-level contract as a free agent in January with the New Jersey Devils.

“Joe took it upon himself this past off-season to put himself into the best possible position to become one of the better forwards in the league,” said Colts General Manager Jason Ford. “His focus and willingness to win were second to none this past season, and we wish Joe all the best moving forward with the Devils organization.”

Blandisi received 83 of a possible 95 points in the voting process ahead of Detroit Red Wings goaltending prospect Jake Paterson of the Kitchener Rangers who received 33 voting points, and North Bay Battalion defenceman Marcus McIvor who finished in third place with 30 voting points.

“It’s a special award to me because to win the award was one of the goals I set out for myself at the beginning and I worked really hard to achieve it,” added Blandisi. “There are plenty of exceptional overagers in the OHL and to even be nominated for this award is an honour.”

Blandisi will be formally presented with the Leo Lalonde Memorial Trophy at the 2014-15 OHL Awards Ceremony scheduled for June 9 at the Hockey Hall of Fame in Toronto.