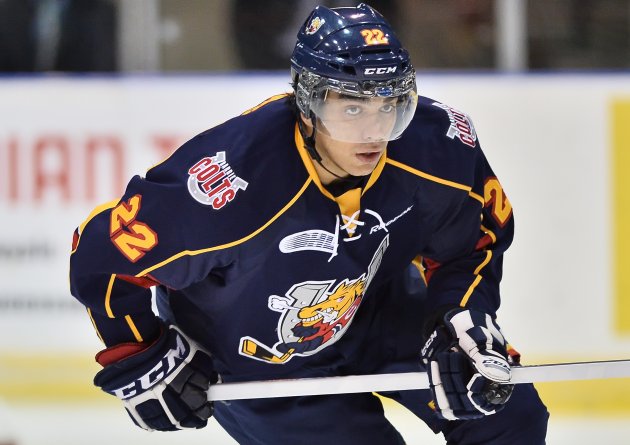 Toronto, ON – The Ontario Hockey League today announced that Detroit Red Wings prospect Andreas Athanasiou of the Barrie Colts is the OHL Player of the Week for the week ending December 8 after scoring twice with five assists for seven points in two games with a plus-minus rating of plus-4.

Athanasiou helped the Colts earn a pair of road wins in Belleville and in Ottawa over the weekend improving the club’s record to 16-11-1-2 where they rank second place in the Central Division.  Athanasiou earned first star honours in both games recording three points including the shorthanded game-winner plus two assists on Saturday night in a 5-1 victory over the Bulls, then notched a goal and three assists on Sunday as part of a 7-2 victory over the 67’s.

Athanasiou, a 19-year-old from Woodbridge, ON, is playing in his fourth OHL season and second with the Colts after beginning his career with the London Knights.  Recently signed to an entry-level contract by the Red Wings who selected him in the fourth round of the 2012 NHL Draft, Athanasiou is 21st in OHL scoring and leads the Colts with 39 points in 28 games after recording 67 points in 66 games last season.

Also considered for the award this week was 2014 NHL Draft prospect Nikolay Goldobin of the Sarnia Sting who scored three goals and five assists for eight points in three games, and last week’s winner Dane Fox of the Erie Otters who scored five goals with two assists for seven points in three games.  In goal, Columbus Blue Jackets prospect Oscar Dansk of the Otters went 2-0-0-0 with a shutout victory posting a goals-against-average of 1.00 and save percentage of .968.