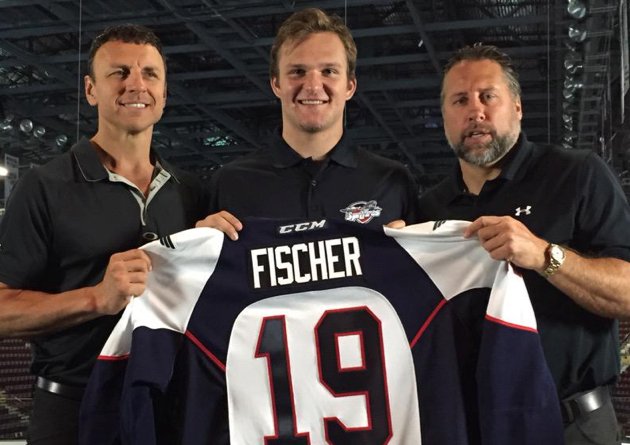 Windsor, ON – General Manager Warren Rychel is pleased to announce the club has received a commitment from right winger Christian Fischer.

The 6’2, 215-pound native of Wayne, Illinois recently signed an entry-level contract with the National Hockey League’s Phoenix Coyotes, who made him their 2nd Round selection (#32 overall) at the 2015 NHL Draft in Miami back in June.

A product of the Chicago Mission AAA system, Fischer spent the last two years with the United States National Training & Development program in Ann Arbor, Michigan, scoring 31 times and adding 33 assists in 66 games with the USNTDP U-18 team last season.

He also added a goal and seven assists in seven games at the World U-18 Championships in Switzerland.

Fischer was an 11th Round selection of the Spitfires back in 2013.

“Christian is a big addition to our club,” Rychel said. “We get a top-six forward and a signed, high NHL pick. He’s a world-class player and we’re obviously happy he chose to come to Windsor. Our fans are going to love a player like this, with his size and skill. He’s a big body that can score and plays a 200-foot game.”

With Fischer set to join the likes of Logan Brown, Luke Kirwan, Hayden McCool and Cristiano DiGiacinto up front, Rychel feels like the club is on the verge.

“We’ve had a real good off-season. Two great new coaches. Bringing in (Russian defenceman Mikhail) Sergachev, a Memorial Cup champion in Bradley Latour. Our skill level has improved. We’ve got a lot of depth. We’re excited to get started.”