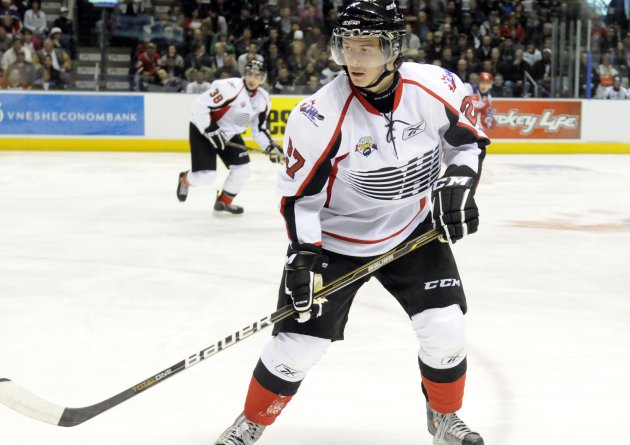 Toronto, ON – The Ontario Hockey League today announced that Oshawa Generals’ forward Christian Thomas is the OHL Player of the Week for the week ending November 21.  Thomas led the OHL with 10 points in two games scoring five goals and five assists with a plus-minus rating of plus-5.

Thomas played his two best games of the season this past week beginning with his first career six-point game on Friday night.  He recorded his second hat-trick of the season and added three assists as first star of a 10-3 win over the Erie Otters.  He followed that up with a four-point game on Sunday and was again named first star of the game scoring two goals and two assists in a 7-4 win over the Barrie Colts.

Thomas, an 18-year-old from Toronto, ON, is playing in his third OHL season.  Selected by the New York Rangers in the second round of the 2010 NHL Entry Draft, 40th overall, he currently sits 12th in league scoring with 17 goals and 16 assists for 33 points in 20 games.  Thomas also competed with Team OHL in the 2010 SUBWAY Super Series and scored a goal in the 4-0 win over Team Russia in London, ON.

Also considered for the award this week was Jason Akeson of the Kitchener Rangers and Andrew Agozzino of the Niagara IceDogs.  Akeson scored three goals and added six assists for nine points in three games, while Agozzino had five points in two games including a four-goal game as first star of a 5-3 win over the Ottawa 67`s on Saturday night.  In goal, Scott Wedgewood of the Plymouth Whalers won two games posting a goals-against-average of 1.50 and save percentage of .952.