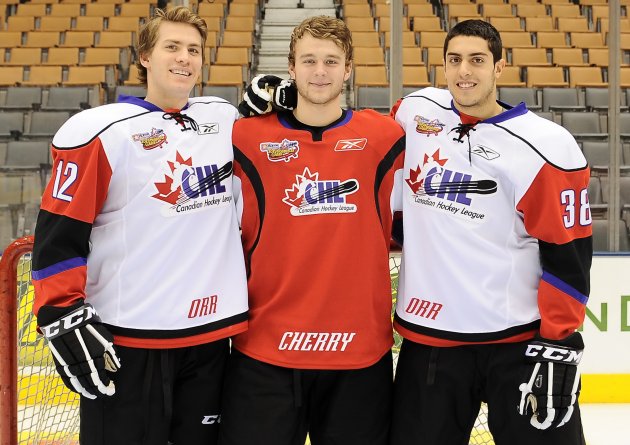 Boone Jenner knew that he would be seeing a lot of Lucas Lessio and Nicklas Jensen this year.

They are all teammates with the Oshawa Generals but as three of the OHL’s top rated prospects for the NHL Entry Draft, they spent a little extra time together.

All three teammates played in the Home Hardware CHL Top Prospects Game in Toronto in January and were all invited to the NHL pre-draft combine in May.

“We did a lot of things together such as the Top Prospects Game,” Jenner said. “We saw each other at the Combine again and seeing each other here is pretty neat. They’re great players as well. It was fun going through the process with them for sure.”

Andy Andreoff (third round to the Los Angeles Kings) and Colin Suellentrop (fourth round to the Philadelphia Flyers) were also selected during the annual draft process of prospects from all of the world.

All five players will head to different NHL cities for training camps in the fall before they get back together to help the Generals in what they hope will be a run to the Eastern Conference championship.

They are the nucleus of a terrific young team with several returning players.

“We’ve got a great team in Oshawa and if I’m back there next year we’ll have a great group of guys,” Jenner said. “I think we’ll have a good team there and it’s fun being there.”

The Generals will also hope to lure Toronto Maple Leafs’ first rounder Tyler Biggs into their program this season. Biggs expects to play university hockey stateside next season but may look at Lessio as a terrific example of the benefits of playing in the OHL.

“Oshawa’s been great for me with everything,” said Lessio, who planned to play in the NCAA but decided to come to Oshawa last season. “It’s a great organization. I did make the jump – they didn’t put too much pressure on me to make the decision. I have no regrets now.”

Lessio agreed that it was special to share the draft day with his teammates.

“All year we were all great friends so it was great to see them picked,” Lessio said. “They went ahead of me but it doesn’t really matter – we all got picked at the end of the day. We probably all going to play on the same team next year so that’s going to be great.”