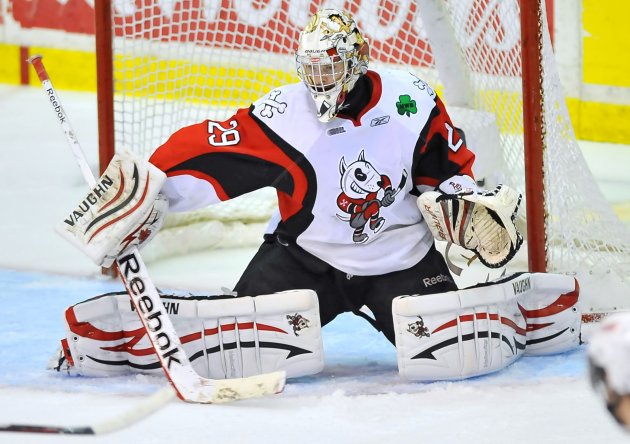 Toronto, ON – The Ontario Hockey League today announced that Mark Visentin of the Niagara IceDogs is the OHL’s Goaltender of the Year for the 2010-11 season.

Visentin posted a 30-9-2-4 record between the pipes for the IceDogs helping the club to their best regular season finish in franchise history with 96 points in the OHL’s Eastern Conference.  In 46 games he carried the second-best goals-against-average with a mark of 2.52 while his .917 save percentage was the highest in the OHL this season.  Visentin also earned four shutout victories which tied for second-most in the league.  He becomes the second IceDogs’ goaltender to win the award following Michael Ouzas in 2004-05 who received the honour with the franchise based in Mississauga.  He is also the second goaltender from a Niagara-based team to win the award following Manny Legace who won in 1992-93 with the Niagara Falls Thunder.

“It’s an honour to receive this award considering all of the talented goaltenders in the league this year,” said Visentin.  “I couldn’t do it without the great players in front of me, the superb coaching staff, and the wonderful organization here in Niagara.  It’s also an honour to follow the footsteps of other great goaltenders who have won this award in the past.”

Visentin, an 18-year-old from Waterdown, ON, has played three OHL seasons with the IceDogs who selected him in the third round of the 2008 OHL Priority Selection.  In 44 starts this season he allowed two or less goals 21 times including five-straight games from February 3-13 in a stretch where he received OHL Player of the Week honours and was named the Vaughn CHL Goaltender of the Week twice.  This season he competed as a member of Team OHL in the 2010 SUBWAY Super Series before being selected to represent Canada at the 2011 IIHF World Junior Championship in Buffalo, NY, where he earned a silver medal.  In April, Visentin signed a three-year entry-level contract with the Phoenix Coyotes who selected him with the 27 overall pick in the 2010 NHL Entry Draft.

“Mark was great for us all season,” said IceDogs Head Coach and General Manager Marty Williamson.  “He is a tremendous worker and the backbone of our team.  We are extremely proud of Mark and this award just goes to show that his hard work and dedication really paid off.”

In a very close vote, Visentin received 63 points while JP Anderson of the Mississauga St. Michael’s Majors received 59 for second place.  Petr Mrazek of the Ottawa 67’s finished in third place with 24 points.

The award was first presented in 1987-88 to Rick Tabaracci (Cornwall) with other notable winners including Ray Emery (Sault Ste. Marie 2001-02), Steve Mason (London 2006-07), and Mike Murphy of the Belleville Bulls who is the only goaltender to win the award twice in 2007-08 and 2008-09.  The Majors’ Chris Carrozzi earned the award last season.

Most Sportsmanlike Player of the Year – Jason Akeson, Kitchener Rangers

Executive of the Year – TBA

Most Outstanding Player of the Year – TBA