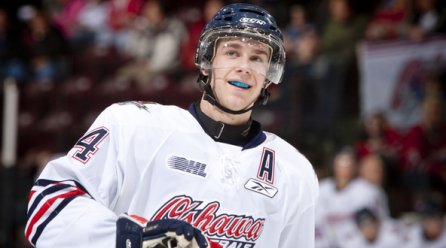 The New York Islanders announced today that they have returned Defenceman Calvin de Haan to the Oshawa Generals.

de Haan, 19, was selected by the Islanders in the first round (12th overall) of the 2009 National Hockey League Entry Draft. Last season, the 6-1, 189-pound defenseman from Carp, ON, scored 24 points (5g/19a) in 34 games with Oshawa, before seeing his second OHL season cut short due to a shoulder injury that required surgery.

de Haan represented Canada at the 2010 World Junior Championships, tallying one assist with a +4 rating in four games to help his team to a silver medal. He posted one goal and one assist in three 2010 preseason contests with the Islanders.

Originally a third round pick of the Generals in the 2007 OHL Priority Selection, de Haan is expected to rejoin his teammates tomorrow and play Friday night with the Generals against the Kingston Frontenacs.  He will make his home debut this coming Monday, October 11th when the Generals host the Ottawa 67’s at 2pm.