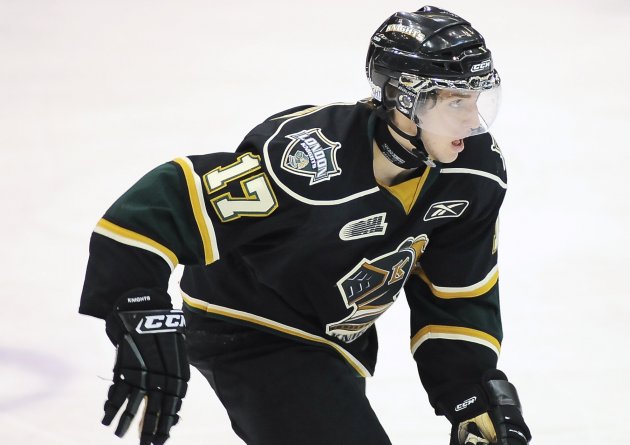 Toronto, ON – The Ontario Hockey League today announced that Seth Griffith of the London Knights is the OHL Player of the Week for the week ending January 23.  He led the Knights to three wins this week recording eight points including two goals and six assists with a plus-minus rating of plus-3.

Griffith’s week was highlighted by a career-high five-point game on Sunday in Oshawa as part of a 6-5 overtime win over the Generals.  He scored one goal and added four assists which included setting up Jared Knight for the game-tying and game-winning goals to receive second star honours.  Griffith also scored the game-winner on Friday night in a 4-2 win over the Peterborough Petes, and recorded two assists on Thursday as the Knights defeated the Sault Ste. Marie Greyhounds 4-3 in a shootout.

Griffith, who turned 18 on January 4, is from Wallaceburg, ON.  Eligible for the 2011 NHL Entry Draft, he has 41 points in 44 games playing in his first full OHL season with the Knights after playing in just 17 games last season.

A pair of Kingston Frontenacs were also considered for the award this week including forward Ryan Spooner and defenceman Taylor Doherty.  Spooner produced nine points in three games scoring five goals and four assists, while Doherty scored twice and added four assists.  In goal, Alain Valiquette of the Sudbury Wolves led the league with 106 saves in three games posting a 2-0-0-1 record with a goals-against-average of 2.27 and save percentage of .938.