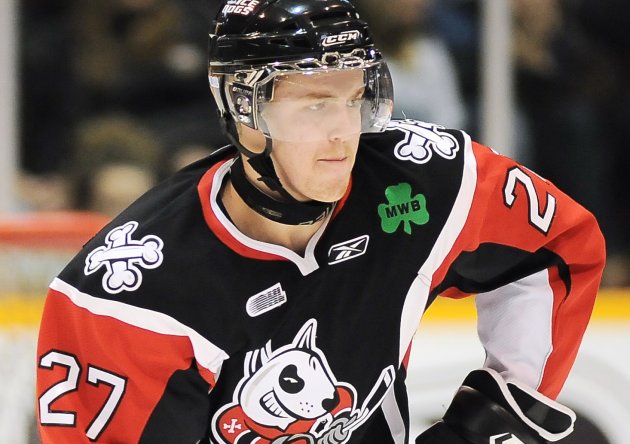 Toronto, ON – The Ontario Hockey League today announced the recipients of three Academic Player of the Year Awards for the 2010-11 season.

Dougie Hamilton of the Niagara IceDogs is this year’s winner of the Bobby Smith Trophy as Scholastic Player of the Year, with goaltender Andrew D’Agostini of the Peterborough Petes earning the Ivan Tennant Memorial Award as the top High School Student, and for the second year in a row Derek Lanoue of the Windsor Spitfires is the Roger Neilson Memorial Award winner as the top Post-Secondary student athlete in the OHL.

While Hamilton will be the OHL’s nominee for the CHL Scholastic Player of the Year Award, all three recipients will be formally presented with their awards at the annual OHL Awards Ceremony June 8 at the Hockey Hall of Fame in Toronto.

Hamilton, a 17-year-old from Toronto, ON, attends Governor Simcoe Secondary School in St. Catharines where he maintains an overall academic average of 94% in six Grade 12 level courses including marks of 97% in Calculus, 95% in Physics, 95% in Personal and Fitness, 92% in English, 92% in Biology, and 91% in Chemistry.  This is Hamilton’s second straight Academic Award after winning the Ivan Tennant Memorial Award in his rookie season.  Hamilton becomes the first member of the IceDogs to be named Scholastic Player of the Year in this the fourth straight year where a member of the organization has been recognized for their achievements in the classroom.  Dougie’s older brother Freddie and teammate Alex Friesen earned top Academic High School honours for the 2008-09 and 2007-08 seasons.

“On behalf of the entire Niagara IceDogs organization, we couldn’t be more proud of Dougie Hamilton for winning the Bobby Smith Award for the 2010-11 season,” said IceDogs President Denise Burke.  “Dougie’s hard work and dedication both on and off the ice has helped develop him into an outstanding young man.  His commitment to academics which allows him to achieve scholastic excellence year after year is simply amazing and just another reason why he is such a great role model for the youth of Niagara.”

On the ice, Hamilton is the top ranked defenceman for the 2011 NHL Entry Draft rated fourth overall among North American Skaters by NHL Central Scouting.  He finished fourth in scoring among OHL defencemen with 58 points in 67 games scoring 12 goals and 46 assists with an additional 77 minutes in penalties and a team-high plus-minus rating of plus-35.  This season he competed in the 2011 Home Hardware CHL/NHL Top Prospects Game scoring a goal for Team Orr, and was a member of Team OHL in the 2010 SUBWAY Super Series.  Hamilton was also named the Central Division Academic Player of the Month for December.

“Dougie’s excellent academic standing, his sound character, and strong leadership capabilities both inside and outside the classroom are what set him apart from other student-athletes,” said IceDogs Academic Advisor Tim Tope.  “While his numerous activities are impressive, he has made a strong commitment to his studies.  His ability to lead his fellow peers through example and stay ‘grounded’ has been most impressive.”

Each year the Bobby Smith Trophy is presented to the OHL Scholastic Player of the year who best combines high standards of play and academic excellence.  The trophy is in honour of Bobby Smith, former Ottawa 67’s star who exhibited a standard of excellence in both of these areas.

Rookie Eric Locke of the Barrie Colts is the runner-up for the award while fellow rookie and 2011 NHL Entry Draft prospect Lucas Lessio of the Oshawa Generals finished in third.

All 20 of the OHL’s member clubs provide nominees for this award which represent the 2010-11 OHL Scholastic Team.

D’Agostini, an 18-year-old from Scarborough, ON, attends Thomas A. Stewart Secondary School in Peterborough where he currently maintains an 87% overall academic average in six Grade 12 level courses.  He has achieved a 91% grade in Canadian and International Law, 89% in Canada and World Issues, 87% in Advanced Functions, 86% in Healthy Active Living Education, 85% in English, and 84% in Exercise Science.  D’Agostini becomes the first member of the Petes to win the Ivan Tennant Memorial Award in the seven years it has been presented, but is also the first member of the organization since Scott Tottle won the Bobby Smith Trophy in 1983-84 to be recognized with an Academic Award.

“The Peterborough Petes are extremely proud of Andrew and his accomplishments in the classroom,” says Petes Assistant General Manager Aaron Garfat.  “Education is very important to our organization and for Andrew to be able to balance a full course load at Thomas A. Stewart and play in the OHL is a true testament to his character.  Not only is he a very competitive and determined goaltender, but he is equally competitive with his studies.”

On the ice, D’Agostini completed his sophomore season between the pipes for the Petes leading the club with 43 games played.  He posted a 10-25-0-2 record with a goals-against-average of 4.35 and save percentage of .882.  Eligible for the 2011 NHL Entry Draft, D’Agostini is currently a member of Canada’s Under-18 Team competing at the 2011 IIHF World Under-18 Championship in Germany.  He was also named the East Division Academic Player of the Month for February.

“Andrew takes pride in his work which is evident in is day to day school routine,” said Petes Academic Advisor Janet Wylie.  “He never complains or asks for extensions, he simply gets done what he needs to do.  He is very responsible and worked well with others in the class often helping his peers who were struggling, and did not have any trouble juggling his six courses with his hockey schedule.”

This award is given to the Top Academic High School Player and is named in honour of Ivan Tennant, who spent a lifetime combining hockey and education.  He was the Kitchener Rangers’ Education Consultant for 20 years and a key figure on the OHL’s Education Consultant’s Committee.

Runner-ups for the award were Eric Locke of the Barrie Colts who tied Jordan Auld of the Brampton Battalion.

Lanoue, a 20-year-old from Belle River, ON, wins the award for the second straight year as a student attending the University of Windsor.  With a six-course load, he maintains an overall academic average of 85.5% which includes marks of 91% in Intro to Economics I, 90% in Statistics for the Sciences, 85% in Linear Algebra, 83% in Intro to Organic Chemistry, 82% in Intro to Inorganic Chemistry, and an 82% in Intro to Economics II.  Lanoue is the second player to win the Roger Neilson Memorial Award in back-to-back seasons following goaltender Danny Battochio of the Ottawa 67’s who won the award in the 2005 and 2006 seasons.

“We’re very proud of Derek, to see him win the Roger Neilson Memorial Award for the second consecutive year is truly amazing,” said Spitfires Vic-President and General Manager Warren Rychel.  “Derek works extremely hard on and off the ice and his dedication to excellence will serve him well in his future endeavours.  His commitment to being the best he can be in all aspects of life makes him a very deserving recipient of this honour.”

On the ice, Lanoue played 55 games for the defending OHL and Memorial Cup champions collecting six goals and 11 assists for 17 points.

“Derek has continued his success this past season while earning more ice time as a veteran player,” said Spitfires Academic Advisor John Laporte.  “Thanks to the league’s education policy, he is well on his way to earning his degree in Chemistry maintaining a better than A-average.”

The Roger Neilson Memorial Award is named in honour of the Hall of Fame Coach who served behind the Peterborough Petes bench in the late 1960’s and early 1970’s.  Neilson, a former high school teacher, was a pioneer in stressing the importance of education to all of his players.

Nathan Chiarlitti of the Sarnia Sting was the runner-up for the award, with the Oshawa Generals’ Anton Zupancic finishing in third place.

• Of the 57 overage players that competed in the league during the 2009-10 season, 31 have signed professional hockey contracts while 26 have accessed their academic scholarships in 2010-11 at various institutions across North America.

• 363 OHL graduates and current players are on scholarship from OHL Member Teams at 66 different institutions across North America.

Most Sportsmanlike Player of the Year – TBA

Humanitarian of the Year – TBA

Executive of the Year – TBA

Defenceman of the Year – TBA

Goaltender of the Year – TBA

Most Outstanding Player of the Year – TBA