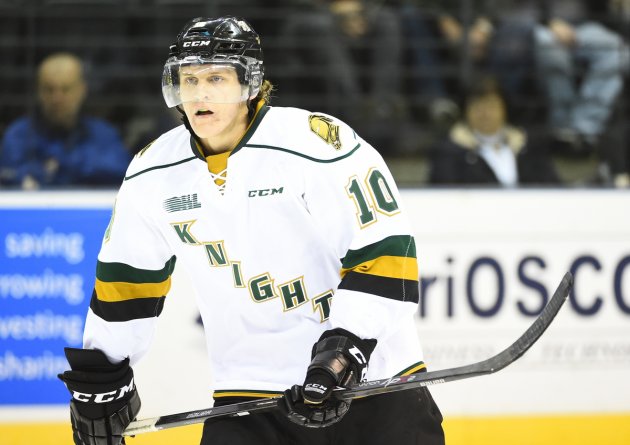 Toronto, ON – The Ontario Hockey League today announced the Top OHL Performers of the Month for January 2015, including Christian Dvorak of the London Knights, goaltender Jake Paterson of the Kitchener Rangers, and blueliners Trevor Murphy of the Windsor Spitfires and Jakob Chychrun of the Sarnia Sting.

OHL Player of the Month – Christian Dvorak (London Knights):
For the second consecutive month, Arizona Coyotes prospect Christian Dvorak of the London Knights is the OHL Player of the Month. Dvorak surpassed his December output of 26 points in 10 games, recording 28 points including 10 goals and 18 assists in 12 January contests. The forward who turned 19 on Monday opened the month of January with his second straight six point effort, recording a goal and five assists in an 8-6 victory over Sarnia. Dvorak had points in 10 of 12 January games, recording multi-point totals in eight of those contests. The sophomore is currently on a nine game point-streak, accruing nine goals and 13 assists in that span.

A 6’0″, 190Ib native of Frankfort, Illinois, Dvorak is currently second among Knights scorers and third in the OHL with 90 points (35-55–90) in 46 games with a plus-minus rating of plus-38. He has provided 11 powerplay goals this season and a total of 19 powerplay assists, helping the Knights to a record of 30-16-0-3 on the season for third place in the Western Conference. He was Arizona’s second round, 58th overall pick in the 2014 NHL Draft.

OHL Defenceman of the Month – Trevor Murphy (Windsor Spitfires):
Windsor Spitfires blueliner Trevor Murphy is the OHL Defenceman of the Month for January, collecting four goals and 16 assists for 20 points in 10 games along with a plus-minus rating of plus-10. The Windsor, ON, native had points in all 10 of his January games and enters the month of February on a 12-game point-streak. The 19 year-old veteran began the month of January with five straight multi-point efforts and guided the Spitfires to a January record of 8-4-0-1 as they continue their pursuit of a playoff spot in the Western Conference. Murphy’s outstanding month propelled him to the top of the OHL’s defensive scoring rankings as he sits tied with Sault Ste. Marie’s Anthony DeAngelo with 53 points (17-36–53) in 45 games.

Now in his fourth OHL season, Murphy leads the Spitfires in scoring with eight of his 17 goals on the season coming on the powerplay. The graduate of the Sun County Panthers Minor Midget program leads the Spits with a plus-minus rating of plus-8 and has points in 17 of his last 20 games.

OHL Rookie of the Month – Jakob Chychrun (Sarnia Sting):
At just 16 years-old, Jakob Chychrun continues to enjoy immense success in his first OHL season, being named the league’s Rookie of the Month for January. The first overall pick of the 2014 OHL Priority Selection had five goals and six assists for 11 points in 12 games last month and continues to provide big minutes on the blueline for the Sarnia Sting. Chychrun’s January was highlighted by a two-point effort on January 8 at home to the Erie Otters, scoring the winning goal with two seconds remaining in the third period to be named the third star of the game. Chychrun had two other multi-point outings, most recently helping the Sting get by the Windsor Spitfires 6-3 on January 25 with a pair of assists. The 6’2″, 194Ib defenceman won’t be eligible for the NHL Draft until 2016.

A native of Boca Raton, Florida, Chychrun leads the Sting in scoring by defencemen with 10 goals and 12 assists in 27 games. The left-handed shooting rearguard was the West Division Academic Player of the Month in November and continues to excel in his OHL career on and off the ice.

Vaughn OHL Goaltender of the Month – Jake Paterson (Kitchener Rangers):
Kitchener Rangers’ newly acquired netminder Jake Paterson has been named the Vaughn OHL Goaltender of the Month for January. The Detroit Red Wings prospect had a memorable month, going 7-2-1-0 between the Saginaw Spirit and his new club posting a 2.27 goals-against-average and a .929 save percentage. Paterson made instant headlines in Kitchener, recording a 29-save shutout in his first appearance with the Rangers on January 9 to blank the Belleville Bulls 5-0. The Mississauga, ON, native stymied the Kingston Frontenacs at The Aud on January 23, making 39 saves in a 2-1 win to earn first star of the game honours. Paterson’s final outing of the month saw him lead the Rangers over the Guelph Storm 4-1 on January 31, turning aside 49 of the 50 shots he faced. The overage veteran set the Spirit franchise wins record by a goaltender earlier this season and has begun a new chapter of his career in Kitchener.

Selected by the Detroit Red Wings in the third round (80th overall) of the 2012 NHL Draft, Paterson represented Canada in the 2014 World Junior Hockey Championship in Malmo, Sweden. The former World Under-17 Hockey Challenge gold medalist has an 19-13-1-1 record this season with a 3.06 goals-against-average and .912 save percentage. He leads all active OHL goaltenders in career wins with 89.