OHL Top Performers of the Month for February 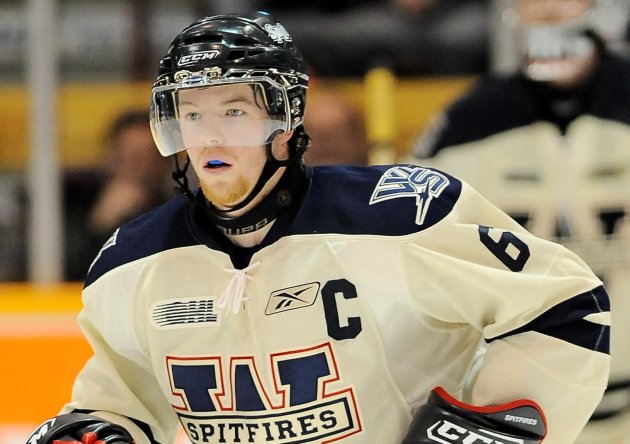 Toronto, ON – The Ontario Hockey League today announced the top OHL Performers of the Month for February, 2011.

Ryan Ellis of the Windsor Spitfires led the OHL in scoring with 27 points in 13 games scoring five goals and 22 assists.  He becomes the first defenceman to claim the Player of the Month award this season, while also earning Defenceman of the Month honours for the third time this season and for the second straight month.  He recorded points in each of the last 12 games of the month including nine multi-point games.  He was named first star of the game an impressive four times in February including twice with four-point performances on February 10 with a goal and three assists despite a 6-4 loss to the Owen Sound Attack, and on February 18 with a goal and three assists in a 7-5 win over the Plymouth Whalers.  On February 27 Ellis became just the third defenceman in OHL history to record 300 career points behind only Rick Corriveau who recorded 329 from 1987-92 and Denis Potvin who produced 330 points from 1968-73.

Ellis, a 20-year-old from Freelton, ON, is playing in his fourth OHL season with the Spitfires and ranks second all-time in franchise scoring behind Bill Bowler.  A Nashville Predators prospect, Ellis was selected in the first round, 11th overall, in the 2009 NHL Entry Draft and is currently fourth in league scoring and leads all OHL defencemen with 89 points in 51 games.

Nail Yakupov of the Sarnia Sting is the Kal Tire OHL Rookie of the Month for the third time this season claiming the award for the second straight month.  He led all rookies in scoring with 17 points in 10 games scoring eight goals and nine assists.  He produced five multi-point games including consecutive four-point games beginning February 21 with two goals and two assists as first star of a 5-3 win over the Sudbury Wolves, followed by a goal and three assists as first star of a 4-3 win over the Barrie Colts on February 24.  He also scored his 43rd goal of the season on February 27 where despite a 5-2 loss to the Sault Ste. Marie Greyhounds he set a new Sting franchise record for goals by a rookie passing the mark of 42 set by Steven Stamkos during the 2006-07 season.

Yakupov, a 17-year-old from Nizhnekamsk, Russia, is sixth in OHL scoring and leads all rookies with 43 goals and 44 assists for 87 points in 56 games.  He is eligible for the 2012 NHL Entry Draft.

Ramis Sadikov of the Erie Otters posted a 7-1-0-0 record and led all OHL goaltenders with a goals-against-average of 2.12 and save percentage of .933 in eight February games.  He quietly helped lift the Otters up the Western Conference standings where they currently sit sixth and have clinched a spot in the OHL Playoffs for the third straight season.  Despite never being recognized as a star of the game this month, Sadikov was a rock between the pipes and helped the Otters defeat some of the top teams in the OHL including a 22-save performance on February 16 to beat the Owen Sound Attack 6-2, and a 29-save performance on February 18 to beat the Niagara IceDogs 5-2.

Sadikov, a 20-year-old from Moscow, Russia, is playing in his second OHL season with the Otters.  He has been a workhorse for the Otters this season with a league-high 3,050 minutes played in 54 games and is tied for the league-lead in wins with 32.  He also has two shutouts and is tied for fifth in the league with a goals-against-average of 2.85 and ranks fifth with a .913 save percentage.