OHL Top Performers of the Month for January 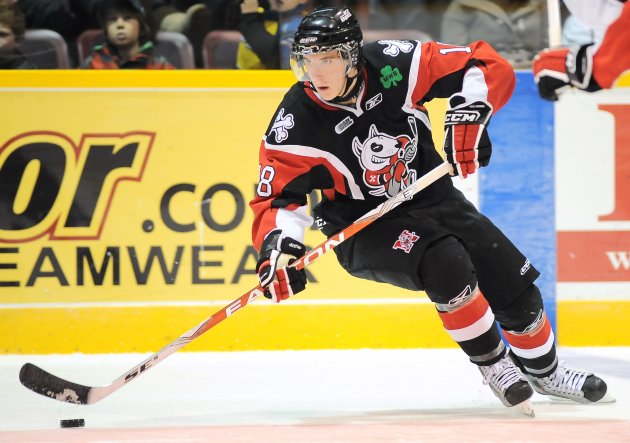 Toronto, ON – The Ontario Hockey League today announced the top OHL Performers of the Month for January, 2011.

Ryan Strome of the Niagara IceDogs led the OHL in January scoring with 26 points in 13 games including four goals and 22 assists.  His 26 points fell one point shy of matching his rookie season total of 27 points one year ago in 61 games split between the IceDogs and the Barrie Colts.  He recorded points in 11 of his 13 games played with 10 multi-point performances leading the IceDogs to a 9-2-0-2 record.  He had five three-point games including January 13 against the Erie Otters where he scored the game-winning goal with two assists as third star of a 3-0 win.

Strome, a 17-year-old from Mississauga, ON, ranks second in league scoring with 78 points in 48 games.  He is eligible for the 2011 NHL Entry Draft and is ranked 19th overall among North American skaters by NHL Central Scouting and competed as a member of Team Cherry in the recent 2011 Home Hardware CHL/NHL Top Prospects Game.

Nail Yakupov of the Sarnia Sting claims this award for the second time this season after tying for the rookie lead in January scoring with 11 goals and eight assists for 19 points in 12 games.  He recorded points in 11 of his 12 games played and had a career-high 11-game point streak stretch from December 10 through January 14.  His month included five multi-point games including his first career OHL hat-trick recorded on January 21 plus an assist for his third four-point game of the season despite a 6-4 loss to the Erie Otters.

Yakupov, a 17-year-old from Nizhnekamsk, Russia, leads all OHL rookies in scoring with 35 goals and 35 assists for 70 points in 46 games.  He is eligible for the 2012 NHL Entry Draft.

Ryan Ellis of the Windsor Spitfires led all OHL defencemen and his club in scoring with 20 points in 10 games scoring four goals and adding 16 assists.  A winner of this award for the second time this season, he also tied for a league-high with a plus-minus rating of plus-12 in January.  He recorded points in nine of his 10 games including seven straight games after returning from the 2011 World Junior Championship where he served as Captain of Canada’s National Junior Team.  His month also included a career-best six-point game on January 28 where he scored a goal and five assists as first star of a 7-1 win over the Kitchener Rangers.

Ellis, a 20-year-old from Freelton, ON, leads the Windsor Spitfires and currently ranks second among OHL defencemen in scoring with 60 points in 37 games.  A Nashville Predators prospect, Ellis was selected in the first round, 11th overall, in the 2009 NHL Entry Draft.

JP Anderson of the Mississauga St. Michael’s Majors posted a 6-0-0-1 record in January with a league-low goals-against-average of 1.30 and a league-high save percentage of .941.  He recorded his OHL-best fourth shutout of the season on January 13 with 22 saves as first star of a 4-0 win over the Brampton Battalion.  Anderson wrapped up January by being named the Vaughn CHL Goaltender of the Week for the week ending January 30.

Anderson, an 18-year-old from Toronto, ON, is playing in his third OHL season and is tied for first in wins with a career-high of 25 but leads the OHL with four shutouts.  He also leads the league with a goals-against-average of 2.17 and has one of the top save percentages at .919.  After signing with the San Jose Sharks as a free agent in September, Anderson was called up by the big club and served as an emergency backup on January 22 in the Sharks’ 4-3 win over the Minnesota Wild.