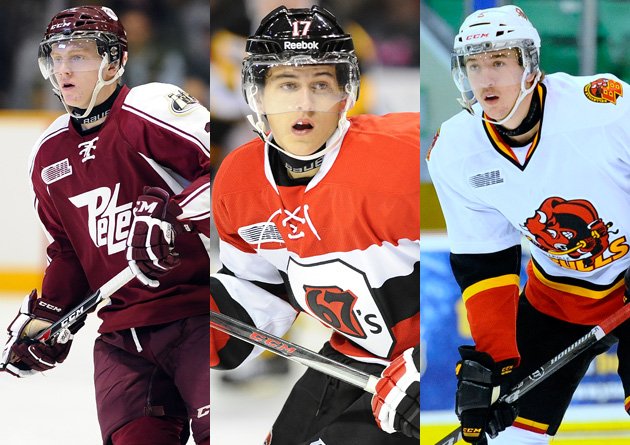 Toronto, ON – The Ontario Hockey League today announced that Travis Konecny of the Ottawa 67’s has been named Captain of Team Ontario for the 2014 World Under-17 Hockey Challenge which begins on Sunday December 29 in Cape Breton, Nova Scotia.

In addition, defencemen Matt Spencer of the Peterborough Petes and Justin Lemcke of the Belleville Bulls have been named Alternate Captains.  The announcement was made by Team Ontario Director of Operations Barclay Branch, along with Head Coach Roger Hunt, and Assistant Coaches Drew Bannister and Seamus Kotyk.

Konecny, a 16-year-old from Clachan, ON, was the top pick in the 2013 OHL Priority Selection after being named ALLIANCE Player of the Year for the Minor Midget Elgin-Middlesex Chiefs.  He is currently second in OHL rookie scoring with 33 points in 33 games including 11 goals and 22 assists.  He follows past Team Ontario Captains that include current OHL stars such as Aaron Ekblad of the Barrie Colts who led Team Ontario last season, Bo Horvat of the London Knights in 2012, and Matia Marcantuoni of the Kitchener Rangers in 2011.

Spencer, a 16-year-old from Oakville, ON, was selected with the third overall pick in the 2013 OHL Priority Selection after winning the 2013 OHL Cup title as Captain of the Oakville Rangers.  The OMHA Player of the Year has six points in 36 games so far this season.  Lemcke, a 16-year-old from Whitby, ON, was selected 18th overall by the Bulls last season.  The Whitby Wildcats graduate has six points in 31 games with the Bulls.

Team Ontario, which includes 20 current OHL players, will open the tournament with a preliminary game against Germany on Sunday with the event concluding on Saturday January 4. The tournament features 10 teams including 5 regional teams and 5 International teams in 2 conferences. The 2 top teams from each conference will advance to the semi-finals while the remaining 3 teams from each group will crossover for placement games.  Team Ontario will play in a conference with Germany, Team Atlantic, Russia and the USA.

Ontario has won eight gold medals at the tournament including 2011 in a 5-3 win over the United States led by two goals in the final from Calgary Flames rookie and former Ottawa 67’s star Sean Monahan.

The Hockey Development Centre for Ontario (HDCO) facilitates the Men’s Under-17 hockey program on behalf of the 3 Ontario Branches of Hockey Canada.

For more information about the 2014 World Under-17 Hockey Challenge please visit www.hockeycanada.ca/wu17.