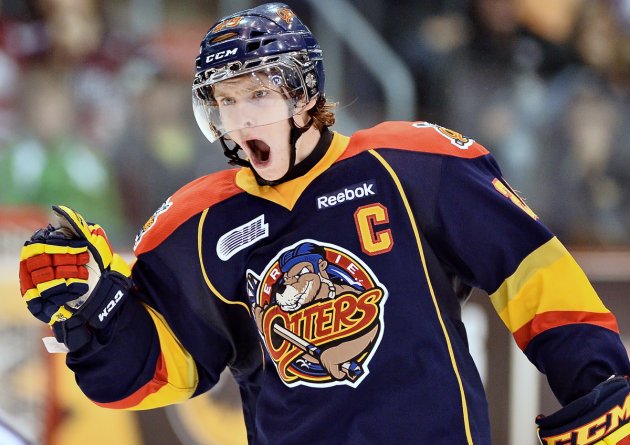 Connor Brown of the Erie Otters became the first Ontario Hockey League player to reach the 100-point milestone on Monday night scoring a goal and one assist as part of a 4-1 win over the Belleville Bulls.

Brown, who turned 20-years-old on January 14, has 36 goals and 64 assists in just 48 games played and leads the entire CHL in scoring.  Now in his third OHL season with the Otters, Brown was originally selected in the 13th round of the 2010 OHL Priority Selection.  He recently signed an entry-level contract with the Toronto Maple Leafs who selected him in the sixth round of the 2012 NHL Draft.

In reaching the 100-point milestone, Brown also set a new Otters record surpassing Cory Pecker’s franchise mark of 99 points recorded in 56 games played during the 2001-02 season.  Brown’s 100 points in 48 games played is also the fastest since the 2007-08 season when the Oshawa Generals’ duo of Brett MacLean and John Tavares reached 100 points in 45 and 46 games respectively.

Last season three OHL players recorded 100 points including top scorer Vince Trocheck of the Plymouth Whalers with 109 points, Charles Sarault of the Sarnia Sting with 108, and Nick Cousins of the Sault Ste. Marie Greyhounds with 103 points.