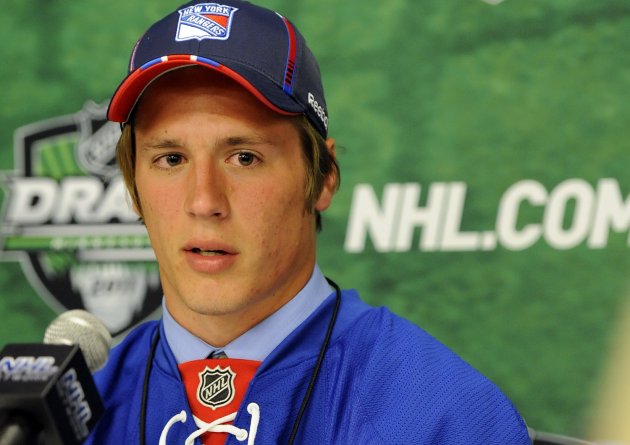 Plymouth Whalers President, General Manager and Head Coach Mike Vellucci announced the signing of 18-year-old forward J.T. Miller, who was originally selected by the Whalers in the fifth round (93th overall) of the 2009 Ontario Hockey League Priority Selection.

After spending the last two seasons in Ann Arbor with the US National Team Developmental Program, Miller was taken this summer in the first round (15th overall) by the New York Rangers in the 2011 National Hockey League Entry Draft.

The Rangers signed Miller to an entry-level contract on Thursday.

“J.T. is a skilled power forward,” said Vellucci. “He already plays what we call Whaler hockey.  Given a little time, he should fit in well in Plymouth.”

“I’m very excited to finally get to Plymouth,” Miller said Thursday in a telephone interview.  “I’ve had to make a couple of tough decisions over the last few weeks, but I’m happy to get up there and am ready to play.  The two other first-rounders (Stefan Noesen and Rickard Rakell) on the team are great players.  Plymouth looks like a strong team with one of the best coaches in the league (Mike Vellucci) – if not the best, in my opinion.  I’ve seen Plymouth play a few times, especially when Tyler Seguin was there, and it was great to watch.”

“We love the way J.T. plays the game,” said Gordie Clark, the Rangers Director of Player Personnel. ”Everyone who went out to see him came back with (the opinion that) every shift J.T. takes is identical – he expends himself in his skating game and his physical game, making plays and crashing the net.  He has all of those qualities and he uses them on every shift.”

Video: Clark discusses the selection of Miller at the 2011 NHL Entry Draft. (Video courtesy of the New York Rangers).

Video: Miller is interviewed at the 2011 NHL Entry Draft. (Video courtesy of the New York Rangers).

“I’m a big forward who likes to use my speed to my advantage,” Miller said. “I try to get pucks to the net and be in front of the net as much as possible.”

“He’s got good size,” said Bob McKenzie of TSN.ca when the Rangers selected Miller at the NHL Entry Draft.  “He plays a real, hard physical game, gets in hard on the forecheck and makes things happen.  From February on, his game really took off. He elevated his game and played his best hockey of the season at the Under-18 World Championships in April.  He was a real force.”

Miller led Team USA in scoring with 13 points in six games en route to capturing the gold medal. Miller was selected by coaches as Team USA’s top player during the tournament.

Video: Miller in action for Team USA at the tournament (Video courtesy of nhldraftvideo).

The addition of Miller give the Whalers three players who were selected in the first round of the 2011 NHL Entry Draft – Miller at 15th overall; Stefan Noesen, who was taken by Ottawa 21st overall; and Rickard Rakell, who was taken by Anaheim 30th overall.  Other Whalers taken in the 2011 NHL Entry Draft include Garrett Meurs by Colorado (5th round, 123rd overall) and Matt Mahalak by Carolina (6th round, 163rd overall).

Other current Whalers who are NHL drafts include goaltender Scott Wedgewood by New Jersey (3rd round, 2010); defenseman Austin Levi by Carolina (3rd round, 2010); and center Jamie Devane (3rd round 2009) by Toronto, who may return to the Whalers this season as an overage player.

Miller is expected to report with the rest of the Whalers on Sept. 1 for the start of training camp.