Spitfires’ Janes and Diodati ready for new beginning at STU 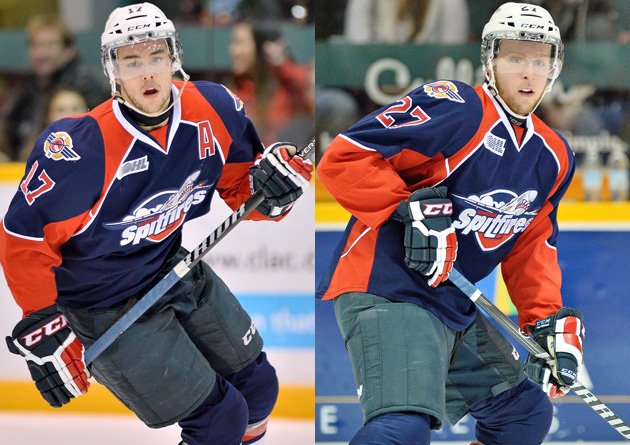 Eric Diodati and Steven Janes are both quick to admit: the idea of heading more than 1,500 kilometers east, after being away from home for the last five years, seemed like a bit of a stretch at first.

“Initially we weren’t so hot on going all the way to New Brunswick,” Diodati said with a chuckle, from his home in Niagara Falls. “But the more we talked to the people at STU, the more it became the right choice.”

So the good friends, and former billet brothers, both freshly 21, are headed to St Thomas University in Fredericton in the fall, after completing their Ontario Hockey League careers here in Windsor in 2013-14.

The two are part of a bumper crop of recruits for the upstart CIS school, which has also received commitments from Andrew Fritsch (Sault Ste Marie), Matt McLeod (North Bay) and goaltender Tyson Teichmann (Kitchener) in the past few weeks.

“I’m grateful for the chance,” Janes said. “Leaving the OHL is tough. It breaks you down. You live and breath playing hockey for, in my case, five years. The first couple weeks after our season ended was tough. You’ve had so much fun and it’s so hard to say goodbye.”

“But then you realize you’ve got a great chance for a new start.”

That chance comes courtesy of the OHL’s Scholarship Program, and a longstanding commitment to education. As part of their time in the league, both Janes and Diodati will have the cost of their tuition, textbooks and cumpulsory fees covered.

“I am really adamant about getting my degree and starting the next chapter in my life if hockey isn’t going to be number one,” Diodati said. “I’m just starting to realize I’m only 21! I have so much time to decide things like what I want to major in. What I want to get into. It’s exciting.”

“The OHL has it right,” Janes added. “Having a chance at an education, a package that any kid or their parents would be very lucky to have, is amazing.”

“I’m looking forward to it, and the chance to continue to play hockey at a high level.”