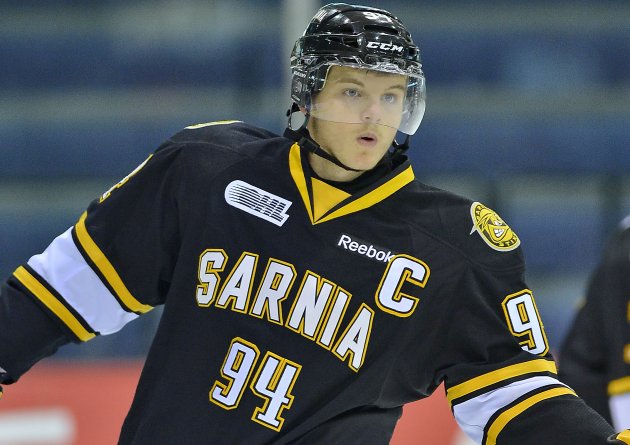 Toronto, ON – The Ontario Hockey League today announced that Sarnia Sting forward Alex Galchenyuk is the OHL Player of the Week after leading the league with eight points in two games including five goals and three assists and a league-high plus-minus rating of plus-6 for the week ending December 16.

Galchenyuk led the West Division leading Sting to a pair of wins before the Winter Break beginning with a 4-2 victory over the Guelph Storm on Friday night.  In that contest he was named second star with two goals including one on the power play along with one assist helping set-up former Player of the Week Charles Sarault’s game-winner in the final minute of the second period.  On Saturday night Galchenyuk picked up his second career five-point game as part of a 7-4 win over the Kingston Frontenacs.  The game’s first star scored three goals for the second time this season including one shorthanded marker before netting his 27th of the season which ties him for the OHL lead.  He also assisted on a pair of goals including Reid Boucher’s game-winner midway through the second period.

Galchenyuk, an 18-year-old from Milwaukee, Wisconsin, is playing in his third OHL season with the Sting after being the top pick in the 2010 OHL Priority Selection.  Selected third overall by the Montreal Canadiens in the 2012 NHL Draft, Galchenyuk is second in OHL scoring with 61 points in 33 games.  He is currently attending Team USA’s National Junior Team Selection Camp for the upcoming World Junior Championship in Ufa, Russia.

Also considered for the award this week was Connor Crisp of the Erie Otters who scored four goals and three assists for seven points in three games, while Nick Cousins of the Sault Ste. Marie Greyhounds also picked up seven points in three games scoring three times with four assists.  In goal, the Hounds’ Matt Murray went 3-0-0-0 with a goals-against-average of 1.65 and save percentage of .938.