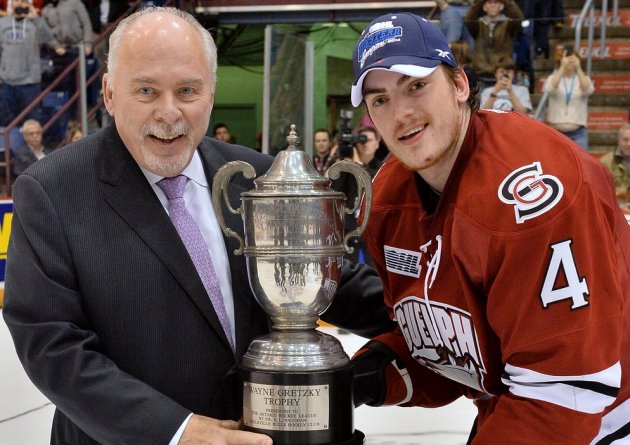 The Storm earned their second Wayne Gretzky Trophy, previously winning the title in 2004 before winning the OHL title that season.  They will face the Eastern Conference Champion and Bobby Orr Trophy winning North Bay Battalion in the Rogers OHL Championship series starting Thursday night in Guelph.

“We’re going to enjoy this. It’s been a battle,” Storm coach Scott Walker said. “The journey’s not over, but I’m pretty impressed with the way our team played. It was just a joy to watch them. I’ve never seen a team work so hard together.”

Kerby Rychel scored the game’s first goal at 8:42 of the first. Defencemen Matt Finn and Nick Ebert each added first period goals giving the Storm a 3-0 lead heading into the break.

Both goalies kept the second scoreless as the Storm failed to scored on two 5-on-3 power plays.

Zack Mitchell increased the Storm’s lead to 4-0 with the game’s first even strength goal at 2:25 of the third. The Otters down 4-0 pulled goaltender Devin Williams with just over five minutes remaining. Mitchell sealed the win for the Storm with his 10th of the post-season into the empty net.

“We lost to a very good hockey team,” Otters coach Kris Knoblauch said. “We feel that maybe we could have done a few things differently to make the series a little bit more competitive but, ultimately, they were the better team in these games.”

Justin Nichols stopped all 40 shots he faced for the shutout.