The North Bay Battalion found themselves at the bottom of the Ontario Hockey League standings in 2019-20, but it wasn’t for lack of leadership.

The Troops say goodbye to a pair of long-time OHL veterans in Shane Bulitka and Nick Grima who joined the club mid-season and helped improve the young team’s play in the second half under head coach Ryan Oulahen.

Shane Bulitka (Sudbury, North Bay – 2015-20)
A long-time rival of the Battalion throughout his three-and-a-half seasons with the Sudbury Wolves, Shane Bulitka finished out his OHL career in North Bay, recording 20 points (7-13–20) over the final 24 games of the season. The 20-year-old from Ilderton, Ont. is widely respected as a responsible two-way forward as evidenced by his plus-37 plus/minus rating on a competitive team in Sudbury last season. He finishes his OHL career with 160 points (57-103–160) over 259 career regular season games. He also appeared in 14 playoff games, recording eight points (2-6–8) along the way. Bulitka was originally a second round pick of the Wolves in 2015 from the Elgin-Middlesex Chiefs Minor Midget program.

Nick Grima (Peterborough, Sarnia, North Bay – 2015-20)
Selected in the same round as Bulitka in the 2015 OHL Priority Selection, Nick Grima rounded out his OHL career in North Bay following four seasons between Peterborough and Sarnia. The 21-year-old from Toronto, Ont. matched a career-high with the Troops this season, recording 30 points (3-27–30) over 54 games. He enjoyed a career night on Jan. 2nd against Niagara, registering four assists in a 9-8 overtime loss. The 6-foot, 197Ib. defender finished his OHL career 11 games shy of the 300 mark, putting up 107 points (13-94–107) along the way. Grima appeared in 23 career playoff contests, posting four points (1-3–4). He was a second round pick of the Peterborough Petes in 2015 from the Toronto Titans Minor Midgets.

2000-born players:
The Battalion feature four 2000-born players, none of whom are selected by NHL clubs. Captain Luke Moncada enjoyed a breakout season with 34 goals, including a league-leading seven shorthanded over 62 games. Other 2000-born players include forward Chad Denault, defenceman Braden Henderson and goaltender Cameron Lamour. 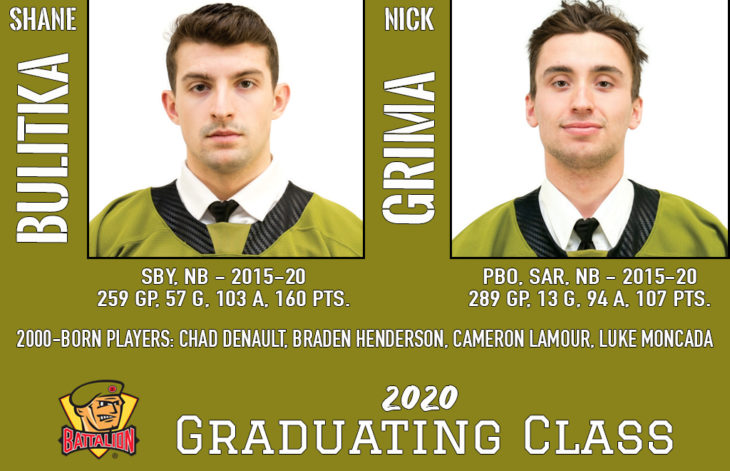