Five past and present OHL players, headlined by Hamilton Bulldogs forward Mason McTavish, have been named to Hockey Canada’s 25-player roster for the 2022 Olympic Winter Games in Beijing, China.

Hockey Canada unveiled the roster on Tuesday, with McTavish, selected third overall by the Anaheim Ducks last summer, as the only current CHL player on the squad. The 18-year-old from Carp, Ont. has 12 points (9-3–12) over seven games between Hamilton and Peterborough this season.

“We are proud to unveil the 25 players that have been nominated to represent Team Canada in Beijing. We know these athletes will represent our country with a tremendous amount of pride as they compete for an Olympic gold medal,” said Tom Renney, chief executive officer of Hockey Canada. “Hockey Canada wishes to extend its congratulations to the players and their families on their nomination to the Canadian Olympic Team. We know Canadians across the country and around the world will join us in cheering on the team at Beijing 2022.”

*Won gold at 2010 Olympics in Vancouver, BC
^Won bronze at 2018 Olympics in PyeongChang, South Korea

In Beijing, the men’s hockey tournament will take place Feb. 9-20 at the National Indoor Stadium and Wukesong Sports Centre. Canada will aim for its 10th men’s hockey gold medal and first since 2014 when it opens preliminary-round action against Germany on Feb. 10. 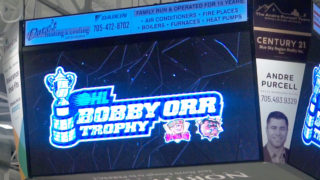