Toronto, ON – The Canadian Hockey League is proud to announce that forward Shane Wright of the Kingston Frontenacs is the 2019-20 recipient of the CHL Rookie of the Year Award presented by Wawanesa Insurance.

Wright led all CHL rookies in scoring with 66 points including 39 goals and 27 assists in 58 games competing as the league’s youngest and only full-time 2004-born player after being granted exceptional status by Hockey Canada.

“Wawanesa Insurance is proud to present the 2019-20 CHL Rookie of the Year Award to Frontenacs forward Shane Wright,” said Selena Hinds, Vice President of Brand, Communications and Community for Wawanesa Insurance. “We’re all missing hockey right now, but players like Shane remind us the future is bright, and we’re looking forward to cheering Shane on next season.”

The 16-year-old from Burlington, Ontario, was selected first overall by the Frontenacs in the 2019 Ontario Hockey League Priority Selection.  His 39 goals set a franchise rookie record surpassing the mark of 36 set by Bernie Nicholls back in 1979-80, while his 66 points equal what past exceptional status star forward Connor McDavid of the Erie Otters produced in 63 games back in 2012-13.  In total, Wright put together 17 multi-point performances including his first career hat-trick and four-point effort on February 29 against the Flint Firebirds, and tied for the CHL lead in scoring three overtime winners.  Upon his return from the World Under-17 Hockey Challenge where he served as captain of Team Canada Black, Wright was appointed an alternate captain for the Frontenacs making him the youngest player to wear an ‘A’ in CHL history.  He will be a top prospect for the 2022 NHL Draft.

“Thank you for selecting me as the CHL Rookie of the Year,” Wright said. “It’s a huge honour for me and I know both Dylan (Guenther) and Zachary (Bolduc) are both more than deserving of being granted this award and I’m just truly honoured to be selected for it. I want to thank my parents for always supporting me. The amount they sacrificed for me throughout my entire career to get to this point, all the love they gave as well, they turned me into the person I am today. I’d like to thank my coaching staff for always pushing me, always trying to make me better, and learning so much from them with their advice. And finally, I’d like to thank my teammates. Coming to the rink every day is the best time of the world being with those guys and I wouldn’t be able to get this award without them.”

Wright becomes the first member of the Frontenacs to win the national award since it was first presented in 1988.  The only other Kingston player to receive consideration was Chris Gratton back in 1991-92.  He’s now among just seven players to win this award after joining the CHL as a number one pick following Quinton Byfield of the Sudbury Wolves (2018-19), Alexis Lafreniere of the Rimouski Oceanic (2017-18), John Tavares of the Oshawa Generals (2005-06), Sidney Crosby of the Oceanic (2003-04), Patrick O’Sullivan of the Mississauga IceDogs (2001-02), and Alexandre Daigle of the Victoriaville Tigres (1991-92).  Tavares, born September 20, 1990, was the very first player to be granted exceptional status by Hockey Canada and is the only past recipient who was younger than Wright at the time of his recognition. 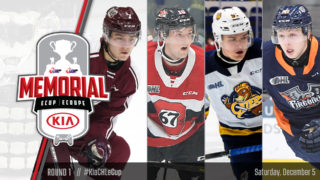