Records were made to be broken.

But in an event with a 99-year history, it takes a special performance to raise the bar.

Erie Otters captain Dylan Strome did just that on Monday night delivering an incredible seven points including four goals and three assists as part of a 12-5 win over the QMJHL champion Saint John Sea Dogs.

“I didn’t even know it was a record to be honest with you,” said Strome when he was informed of his place in Mastercard Memorial Cup history. “We’re having fun, playing hockey and things were rolling for us but we expect a much different game against the Spitfires on Wednesday.”

The Arizona Coyotes prospect said he received an overwhelming response of well wishes from friends and family following the historic night and even heard from members of the Yotes like Anthony Duclair (Quebec 2015) and Max Domi (London 2012, 2013, 2014) both with Mastercard Memorial Cup experience.

“We have a family group chat and everyone was pretty excited for me,” Strome said of older brother Ryan (New York Islanders) and younger brother Matt (Hamilton Bulldogs). “It was kind of funny, I checked my phone and one of the messages from them just said ‘good game lol’.”

Six points has been recorded on four different occasions in Mastercard Memorial Cup modern history which dates back to the 1972 event with the introduction of the round-robin format.

Contini’s Fincups and Mathers’ Blazers both earned Mastercard Memorial Cup titles, with Rouleau’s Olympiques falling to Guelph in the final.

“It was big for our team,” Raddysh said. “We knew they were going to come out hard with their loss last game. We just stuck to our game plan, had a good start, and the rest of it just went our way.”

Raddysh and older brother Darren combined for 10 points in the contest as the Otters set a new Mastercard Memorial Cup record with 12 goals scored.

The previous high of 11 goals was achieved twice in past tournaments by Quebec and Regina.  The Remparts defeated St. Catharines 11-3 back in the 1974 Semi-Final, while the Pats defeated Cornwall 11-2 in 1980.

The Otters and Sea Dogs combined for a record 17 goals, surpassing the former mark set in 1984 when the Kitchener Rangers and Kamloops Blazers combined for 16. 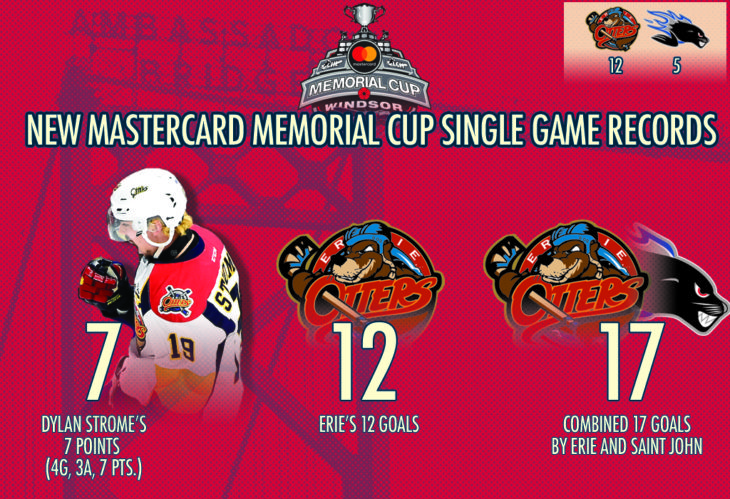