The fifth edition of the Wawanesa OHL Plays of the Week for the 2018-19 season feature a collection of the league’s Top-5 goals during the week ending October 21.

This week’s highlights start and end with Sudbury Wolves teammates connecting for some jaw dropping goals on home ice.  At number five we see top pick Quinton Byfield make moves to create a chance for Macauley Carson, then at number one it’s Kirill Nizhnikov who goes between-his-legs on the rush then feeds to David Levin who follows suit by scoring between-his-legs.  In between we see great individual efforts by Owen Tippett of the Mississauga Steelheads to score his 100th goal, Keeghan Howdeshell of the Sault Ste. Marie Greyhounds who pulls off yet another lacrosse style goal, and Tye Felhaber of the Ottawa 67’s with some sweet shorthanded skills. 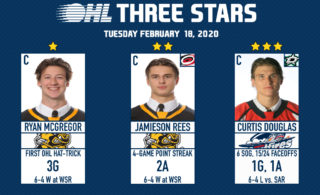