Whalers’ Vellucci is Executive of Year 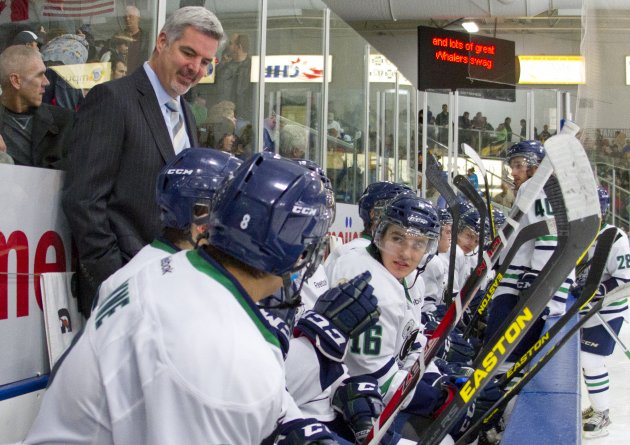 Toronto, ON – The Ontario Hockey League today announced that Plymouth Whalers’ President, Governor, General Manager and Head Coach Mike Vellucci is the recipient of the OHL Executive of the Year Award for the 2012-13 season.

Vellucci, who also earned the Matt Leyden Trophy as OHL Coach of the Year this season, led the Whalers behind the bench and in all front office operations as the club captured their 12th division title in franchise history while earning a berth in the OHL playoffs for a record 22nd consecutive season.

Selected by the league’s Executive Council, the OHL Executive of the Year Award is presented annually to the executive whose team demonstrates success both on the ice and at the administration level through excellent organization and franchise success.  Vellucci is the second member of the organization to earn the award following Jim Rutherford who won back-to-back Executive of the Year Awards in 1993-94 with the Detroit Jr. Red Wings.

“I believe Mike is very deserving of this award.  I am very proud of him,” said Whalers Owner Peter Karmanos Jr.  “As good of a coach as Mike is he is an even better business executive.  Being able to perform both jobs is something that is very difficult.  I believe Mike’s ability to excel at both jobs and perform in an outstanding fashion is something that is very impressive, unique, and truly sets him apart.  To win both Coach of the Year and Executive of the Year is quite an accomplishment.”

A 46-year-old from Farmington, Michigan, Vellucci was an integral part of the building of Compuware Arena which opened in 1996 and he remains in charge of the facility which includes the restaurant CJ’s Brewing Company on top of his coaching and club executive role.  Furthermore, Vellucci remains in charge of the successful Compuware Youth Program where he competed prior to his OHL playing days with Belleville in 1983-84 and 1985-86, and later coached prior to stepping behind the Whalers’ bench.  The Compuware Youth Program has compiled 14 National Championships and 33 State Championships since 1980.  Vellucci has served as President of the Whalers since 1999 and just completed his 12th season as Head Coach currently holding an all-time record of 440-278-40 for a .607 winning percentage and ranks 11th on the OHL’s all-time wins list.

This season marks the fifth time in league history where the Coach of the Year and Executive of the Year were earned by the same club following Craig Hartsburg and Mike Kelly with the Guelph Storm in 1995, Gary Agnew and Paul McIntosh with the London Knights in 1998, the Knights’ Dale Hunter and Mark Hunter in 2004, and Mark Reeds and Dale DeGray with the Owen Sound Attack in 2011.

Vellucci will be formally presented with the OHL’s Executive of the Year and Coach of the Year Award at the league’s annual award ceremony at the Hockey Hall of Fame on Tuesday June 4.